The Woman in Black is a throwback to the days where you didn’t need a huge special effects budget to unleash the dark side of your imagination. At times fettered by the confines of its indie venue and shoestring budget, Woman is nevertheless a solid introduction to a unique genre usually not attempted in the local theatre scene.

Before I stumbled upon Yogurt Theatre’s announcement, I had only heard of the original novel in passing. Here’s a short synopsis, just in case you’re in the same boat:

A terrifying ghost play adapted by Stephen Mallatratt from the book by Susan Hill. The Woman in Black has been enjoying a run on the West End in London since 1988 and has been performed all around the world. The success of this show is due to its ability to sneak into your mind. This is not a bloody or gruesome story it’s the kind that crawls up your spine and whispers in your ear.

Woman starts in the most unlikeliest of places: a play within a play. Retired lawyer Arthur (Allan Morgan) enters and reads haltingly from a dogeared manuscript, all the while fielding criticism by cocky actor-turned-coach-for-hire (Chris Cochrane). We learn that Arthur is struggling with a haunted past, which he hopes will be put to rest by telling the tale to close family and friends. Arthur keeps on proclaiming that he’s no consummate actor, but the tragic nature of the story keeps him going through the introspective practice sessions.

The coach takes on Arthur’s role, while Arthur himself plays all of the various key figures encountered along the way. Because of this arrangement, the older Arthur is able to look back on his younger self and relive the consequences of his actions. Throughout the play, the two actors move between rehearsals and commenting on the particulars of Arthur’s story. It’s an interesting way of building and releasing tension – after a particularly thrilling part, the characters will dial it back a notch and build up more tension by hinting at the events to come. 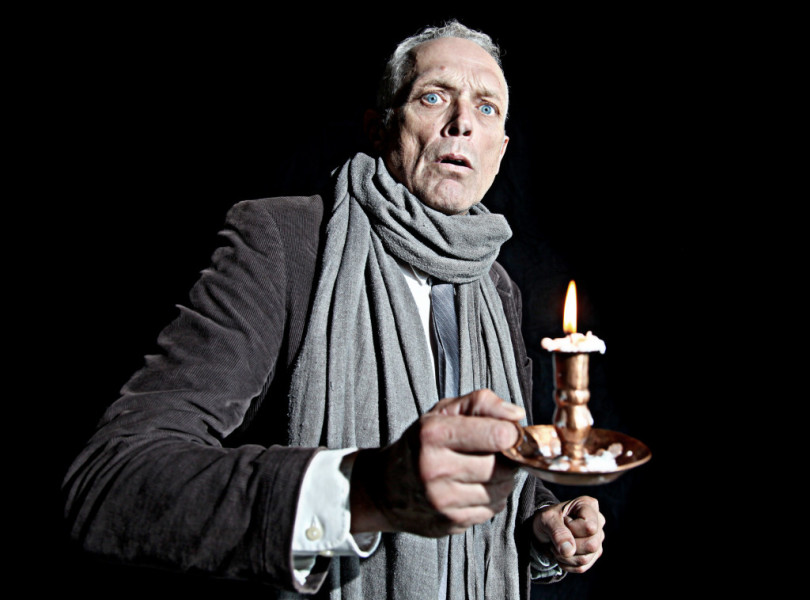 Allan Morgan is an actor at play. Each role was well-differentiated from the rest through memorable particularities: the stoic driver, the simpering maid, the mortally afraid local man. The small nuances in Morgan’s performances take these minor parts beyond typical stereotypes and into believable people living within the shadow of a haunted countryside town.

This must be an enjoyable performance for Morgan, and it’s easy to see the pure joy that he brings to the stage. Cochane as the young actor, in contrast, is a good foil – not as polished, and a little less multi-dimensional in the protagonist role. He does gets better as the play goes on, and the two men definitely have a chemistry on stage. That night, both performers fibbed their lines from time to time. The imperfections were minor annoyances in themselves, but they did make the actors break character and in turn took me out of the atmosphere that Woman painstakingly seeks to create.

The recorded track is the key to making this play come alive. Chris Adams on sound hits all the right pockets, filling the room with the busy streets of London, a horse carriage traveling in the countryside, the bustling murmurs of a busy inn.

Woman is not a truly ‘haunted house’ kind of scary. The story is both creepy and engaging, and you can’t wait to see how they wrap it up . The audience obligingly got into the mood, which really helped in heightening the anticipation and the feeling of dread. When the woman sitting next to you, suddenly starts screaming about the mysterious visitor peering through the curtains; you definitely start surreptitiously peering about.

TLDR. In short: go see. After all, who really needs Halloween as an excuse to enjoy deliciously scary theatre?

The Woman in Black, by Yogurt Theatre, plays at the Little Mountain Gallery until November 16. Tickets available here or at the door.