Site-specific theatre is always an exciting prospect because it doesn’t happen often enough, and when you do get a chance to see a site-specific production you know you’ll be in for a treat. Between The Sheets takes place at a private elementary school, more specifically at Admiral Seymour Elementary School in Strathcona. The only ‘set’ here are the desks, the crayon-drawn self portraits of children on the walls; the only lighting coming from the fluorescent lights hanging from the ceiling. This is truly a site-specific show, with no add-ons. This makes the story being told even more uncomfortable and gripping.

It starts out as your average parent-teacher interview, teacher Teresa and parent Marion, both with their own concerns about Marion’s son Alex. Over the course of an hour we see the lives of these two women unfold (and unravel) before our eyes as each revealed secret shakes them to their core and brings into question their previously held beliefs. There’s no gloss, there is no facade in this production- it’s as real as real gets. 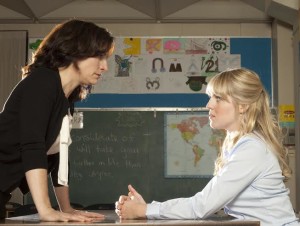 Throughout the play we see the roles of the two women fluctuate. In one moment Marion becomes teacher to Teresa when she whips on her glasses, standing at the teachers’ desk to deliver a scolding; and later on she becomes a motherly figure and a source of comfort when Teresa reveals a painful hidden truth. Teresa goes through her own transitions, at one point acting like a defiant teenager as she stands up for herself, and later becoming wiser than her years when she counsels Marion.

Stephanie Moroz as Teresa and Caitriona Murphy as Marion both have their moments to shine throughout the production; without a backstage space or wings there is nowhere to hide and their focus and dedication to the story they are telling is impeccable.

If you like theatre to take you on a fantasy ride then this show isn’t for you- however if you enjoy the realism that site-specific shows like this offer, the biting narrative and hum of the fluorescent lights will surely deliver.

Between The Sheets runs from March 14 to 26, Tuesday to Saturday at 8pm and Saturday and Sunday at 4pm at Admiral Seymour Elementary School, 1130 Keefer Street.

Tickets are available on Eventbrite.ca, $20 matinees and $25 general admission. $15 day of tickets for those 25 and under.