In this show we enter an alternate reality where the Conservative party has won the second largest majority government in Canadian history, and Prime Minister Harper swears freely- albeit awkwardly. If you are even slightly aware of the nature of current Canadian politics it can feel strange watching a production that takes such a lighthearted approach- but sometimes we need a good laugh to escape reality for a short while; and this production has plenty of them.

PROUD is a smart and sexy political satire that imagines a different outcome to the last Federal election – the Tories took Quebec and won a huge majority. A young, attractive and inexperienced female MP provides the Prime Minister with a new tool in his arsenal, but it soon becomes apparent that there is more to her than meets the eye. In amongst the political manoeuvring and backroom machinations emerges a surprising, complex and very funny portrait of the Prime Minister. 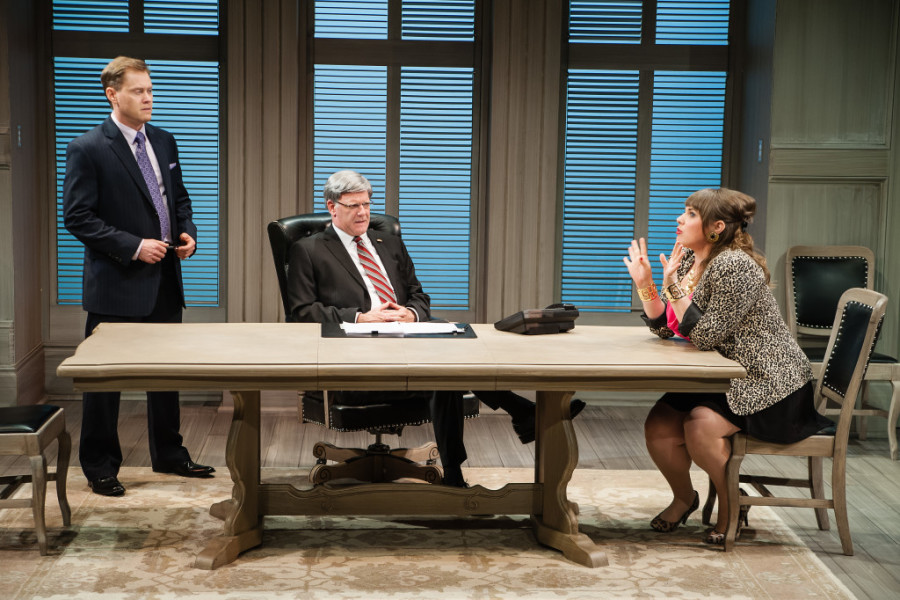 On the first day back on Parliament Hill after the election, rookie MP Jisbella Lyth bursts into the Prime Minister’s office looking for a condom- she wants to have sex with journalist Evan Solomon on her desk- rather than appearing shocked, Harper calmly announces that she will now have to resign her position. She manages to talk her way out of it, and Harper instead decides to use loose cannon Jisbella to create a distraction for the press from some serious changes he wants to make, by having her table a anti-abortion bill in the house of commons. As the show goes on it reveals Jisbella is less ditzy and more clever than we had previously thought, using her charms to manipulate the Prime Minister– but this is a farce, and it’s all part of the fun. 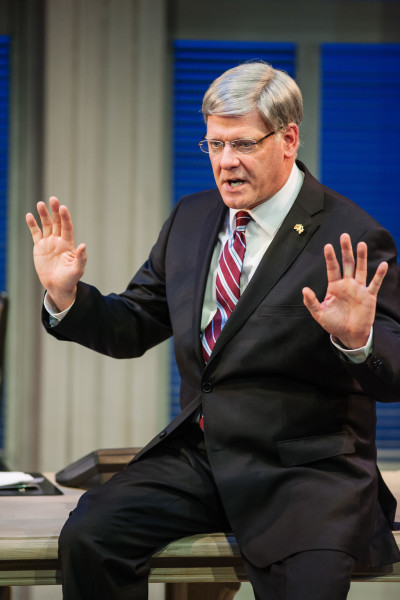 Bringing a lively energy to the production, Emmelia Gordon as Jisbella is fierce and funny. The uncannily Harper look-alike Andrew Wheeler portrays the Prime Minister in a honest and transparent manner (quite unlike the real Harper’s politics) with a bit of awkwardness thrown in for good measure (very like the real Harper). Plus, if you’ve ever wanted to hear a faux-Harper sternly say “mother-freakin’ hashbrowns”, this show is your chance. The scenes with character Jake seem oddly placed in the show and not quite necessary except to add a few extra minutes to a quickly paced 90 minute production.

In this production we see another side of Harper, one that is not quite cold and calculating so much as reasonable and common sense. I even found myself sympathizing and agreeing with him at one point (just a tad). A good production makes you ask questions, and makes you question your own beliefs- what makes you proud about being Canadian? What do you believe in? The show challenges you to reevaluate your beliefs and after hearing Harper spout off a list of things he really doesn’t care about (such as Quebec, whether women choose to have abortions, where the salmon went or why they came back) it makes you wonder which of those things we are supposed to care about really matter to you.

If you are even slightly politically inclined, or want to be, this show is the perfect introduction.