Improv Against Humanity is your typical improv troupe with a twist – the answers are all supplied by the notoriously popular game, Cards Against Humanity. By doing so, the show guarantees some great vetted fodder for laughs of the truly horrible kind.

Here’s a description of the night:

You can compare it to trying to decide what to watch on TV. Humanity is the safe, popular weekly sitcom – you don’t need to have seen last week’s episode, and you really don’t need too many brain cells to appreciate the gags. It’s great water cooler talk: go with friends and you’ll be debating over the best and worst skit, and your favourite comic of the motley crew. Ever so often, a really great concept comes together and makes you seriously laugh out loud. 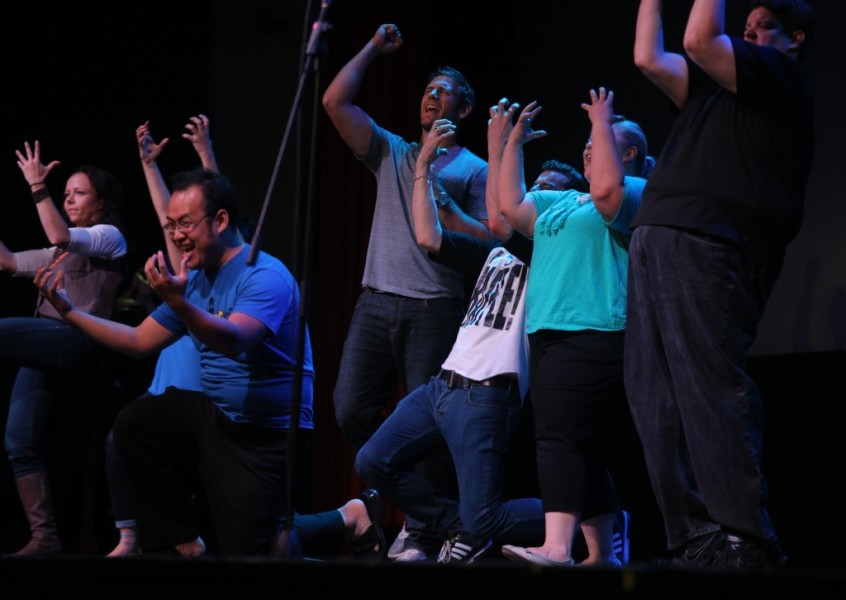 Some of the skits worked. Some of them fell flat into awkward silence (thankfully, the group had the sense to cut these off early). The individual actors were strong, but I don’t think the group is completely comfortable working with each other. It was nice to see as many women as men, and that the women held their own.

The Rio Theatre offers a supremely comfortable venue to take in your improv – the plush seats and bar service are really nice perks. It’s fantastic to see an independent theatre thriving off of a variety of well-attended live shows, while so many other venues have closed their doors. Humanity attracts a younger crowd and boasts a loyal following. The audience good-naturedly went along with all of the group participation bits, and there were even a few dressing up like anime characters.

Given the novelty factor, it will be interesting to see if Humanity has any staying power. Thankfully, it sounds like The Fictionals (the company behind the show) is already thinking of the future. Their next show, Minus World Improv, mixes improvisation with video game references, and is sure to be the coolest nerdy date in town.

Improv Against Humanity plays at The Rio Theatre every third Wednesday of the month. Get a couple bucks off advanced tickets here.