In Gruesome Playground Injuries, two friends are brought together in the strangest of ways.

You’ve never seen a love story quite like this. Gruesome Playground Injuries follows the decades-spanning relationship of an accident-prone daredevil and a corrosive masochist who navigate friendship, love, and the wounds created in between. Doug and Kayleen first meet in the nurse’s office at the age of eight: Doug rode his bike off the roof and Kayleen can’t stop throwing up. Over the course of the next 30 years, their lives continue to intersect at the most bizarre intervals and places, leading the two childhood friends to compare scars and the physical calamities that keep drawing them together. 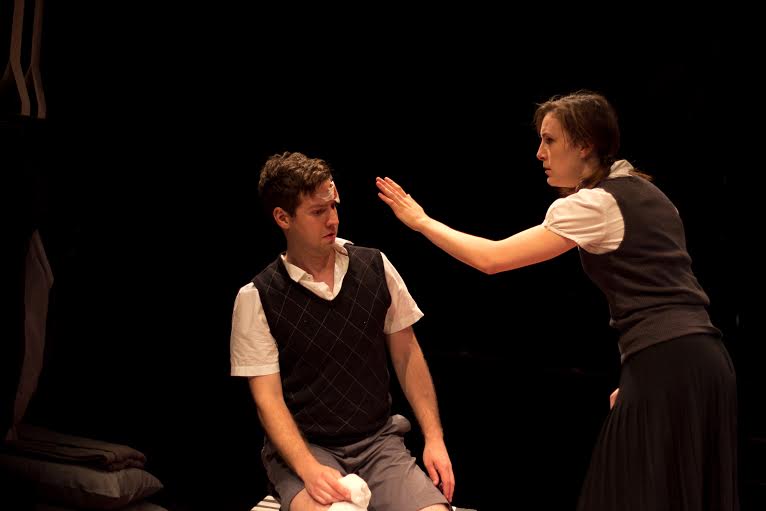 For all its darkness, there is a lot of humor in this show that comes out of the strange meetings of Doug and Kayleen in different stages of their lives and with their various injuries. We first meet the two characters when they are eight years old, and move around to different points in their lives until we finally see them at age 38. Their meetings are at times cute, charming, surprising, cringe-inducing and sad; they both try to save each other in different ways, from other people and themselves.

Kenton Klassen finds joy and humour in his portrayal of accident-prone Doug. Pippa Johnstone brings a grounded solemnness to her role of Kayleen, a woman who finds herself going to extremes in her life in order to feel something. We don’t learn much about these characters beyond the very basics, and if we were given a bit more information; such as why is Kayleen’s father such a horrible person, and the story behind Doug and Kayleen’s extremely close relationship, it would have given the show a little more depth.

I can’t help but wish that there was something more to this show. The interactions between the two characters are intriguing, yet somehow if feels as if the script doesn’t allow them to delve deeper, past the surface. If they had a few more ideas to play with, the show would be much more successful.

Gruesome Playground Injuries runs until July 12th at Pacific Theatre. Tickets are $15 and can be purchased by phone (604) 731-5518 or online at www.pacifictheatre.org