Equivocate; e·quiv·o·cate: use ambiguous language so as to conceal the truth or avoid committing oneself.

Your soul, or your life? This is the question Equivocate wrestles over in this production of playwright Bill Cain’s script.

It’s England, 1606, and a terrorist plot to assassinate King James I – and blow Parliament to kingdom come with 36 barrels of gunpowder – has been uncovered. William Shagspeare is commissioned by Robert Cecil, the King’s Prime Minister, to write the “true historie” of the plot. But as Shagspeare and the acting company of the Globe, under the direction of the great Richard Burbage, investigate the plot, they discover that the King’s version of the story might actually be a cover-up. Shagspeare and his actors are confronted with the ultimate moral and artistic dilemma: speak truth to power and perhaps lose their heads? Or take the money, write propaganda and lose their souls? Or could equivocation be a third option? 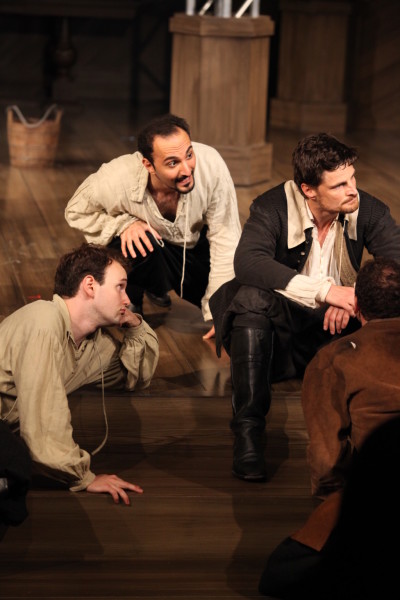 The story of Guy Fawkes and the Gunpowder Plot holds enough intrigue in itself, but in this production we see Shagspeare turn into a bit of a detective as he attempts to discover the truth (and lies) of what initially seems to be nothing more than a foiled attempt to blow up parliament. In this compelling production we watch Shagspeare as he struggles to come to terms with what could be the end of his company and himself should he choose to speak the truth.

The staging of Equivocation is such that at times the cast portray versions of the ‘true’ events as they happen, and segue into characters acting out a play; which works beautifully. The show has many moments where it winks at the audience, such as when Shagspeare’s daughter Judith delivers a soliloquy to the audience; “I hate soliloquy’s. So it’s odd that I have one”, and a handful of other moments that joke about the potential state of Shakespeare’s works & audiences in the modern world. 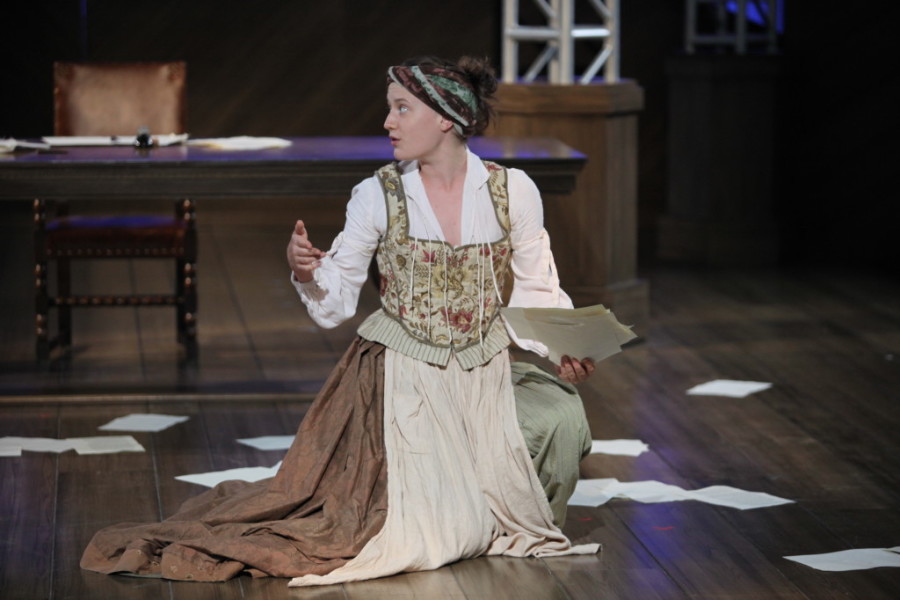 Anousha Alamian steals his scenes as Sir Robert Cecil, Prime Minister to the King. His conniving and smarmy playing of the character inspires many jokes, and it was extremely fun to watch. As a man who is still grieving over his dead son and strained relationship with his daughter, Bob Frazer plays Shagspeare in a grounded and compelling manner as he wrestles with one of the most difficult decisions of his career. Gerry Mackay gives a passionate performance as both Richard Burbage and Father Henry Garnet. Anton Lipovetsky got more than a few laughs on opening night as the dandy King James, and played the young rebellious Sharpe sincerely. Rachel Cairns plays Shakespeare’s daughter Judith, who stands by her father despite his distance. Shawn Macdonald rounds out the cast playing Armin and Sir Edward Coke.

If you are typically hesitant of ye olde Shakespearean tongue, the show for the most part plays in modern English, so you won’t have a tough time following along. And Equivocation has passion aplenty, from the mystery and intrigue surrounding the Gunpowder Plot, to an acting company on the brink; it has lots to tickle your funny bone, and enough mentions of King Lear and the Scottish play to satisfy every hard core Shakespeare fan.