Cats the Musical is one of musical theatre’s most iconic productions and is the fourth longest running on Broadway in history. With this comes a lot of responsibility. There’s a certain expectation that the audience has when viewing CATS and thankfully, Fighting Chance Productions manage to hold their own with this feline phenomenon.

This show has always been close to my heart; I’ve seen a few productions over the years that have tainted the nostalgia of popping in the Westend 1998 VHS into the VCR at least four times a week. As it is such an well-known show, it’s hard to pull Cats off as a regional production and since this is an amateur show, it’s a true feat to be accomplished. 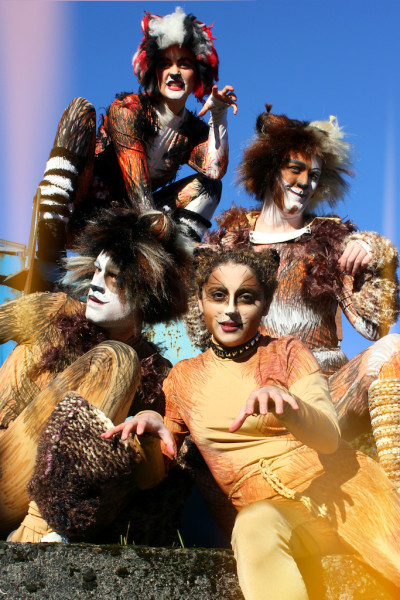 One of the biggest accomplishments of this production is the cast’s energy and commitment. In other amateur versions of this show, I’ve seen everyone just look and sound uncomfortable with the feline mannerisms; under Mooney’s direction, Fighting Chance cast’s dedication is evident.

This production is a great example of ensemble theatre, with most of the cast onstage at all times. Somehow, through a combination of staging and a fine balancing act of giving and taking focus, the chorus never detracts from the main action. My one objection to the direction is the encouragement of audience interaction, which made the audience look more uncomfortable than was probably intended. While it’s effective to break the fourth wall on some occasions, the novelty of the cats venturing into the audience and sometimes even making physical contact with audience members was quickly exhausted.

The costume design and makeup are impressive, places where amateur productions can often miss the mark. Fairlith Harvey succeeds immensely with making the costumes authentic and movable, with just the right amount of feline flair. The costuming is reminiscent of the original design, with just enough uniqueness to set them apart – each cat has a distinct look created for them by Harvey. 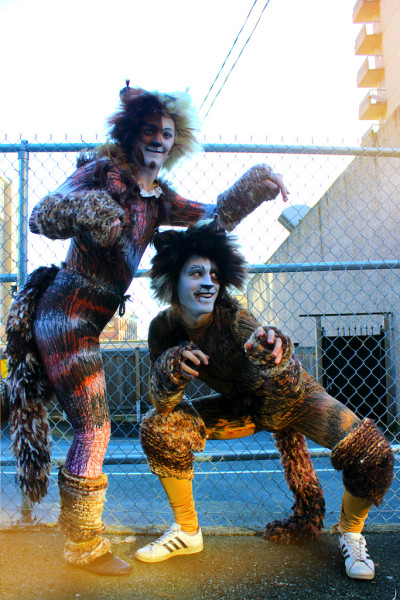 The set is simple enough so not to be distracting, made up of various pieces of “junk” and fences. The troubling factor, however, was the platform at the centre of the stage, which while aesthetically pleasing, was a definitely a safety concern. Every time a character climbed to the top of the platform, it wobbled precariously, leaving the audience uncomfortable and on edge. However, the same platform served as an understated transition to the ‘heavy side layer’ that worked perfectly.

Rachel Carlson’s choreography is dynamic and inventive, keeping the heart of the original Broadway choreo while adding her own flair that features the dancers well. She doesn’t dumb it down for the portion of the cast who aren’t as talented in realm of movement. Unfortunately, only half of the cast really had the dancing chops to pull off the choreography, which sometimes kept the numbers from looking as sharp as they could be, if the dancers had all been at the same skill level.

The most memorable moment of the evening was shockingly during the show’s most overdone song, “Memory.” As Grizabella, Lisa Ricketts sang a gorgeous rendition of the heartbreaking song, a younger version of the ‘glamour cat’, played by Lyndsey Britten, dances around her in a reflection of her former self, making the song that much more powerful. This is just one example of how Mooney and Carlson have manipulated this familiar plot to make it their own.

While the sound balancing left much to be desired, overall, the vocal quality of the cast as a whole was incredibly satisfying. The harmonies were tight and well-distributed and what the men lacked in dance aptitude, they held their own in the ensemble singing.

Despite this being an amateur production, Ryan Mooney and the rest of his creative team and cast involved in CATS succeeded in a lot of ways. If you’re an uber fan of this iconic musical, you might find some flaws; but, going in with fresh eyes, you’re sure to witness a fun, energetic night of local theatre. This run is quickly selling out so if you want to get your paws on tickets, get them soon.

Fighting Chance Productions presents CATS plays at the Jericho Arts Centre, 1675 Discovery Street, Vancouver until March 12. Tickets are $35 for adults and $30 for students/seniors and can be bought online or at the door.