In its 25th anniversary celebration, Royal City Musical Theatre delivers an exceptional production of one of the world’s best-loved musicals, Annie.

As a former child actor myself, I know all too well the missteps that can be made when casting young thespians, however, that need not be a worry with the RCMT’s Annie, as the orphans steal the show!

Again and again, I found myself sporting a grin from ear to ear, as the assembled youngsters sang and danced with awe-inspiring precision, choreographed by Artistic Director Valerie Easton, delighting all those in attendance for opening night.

Julie MacLean, who stars in the title role of Annie, displays charm, mature stage presence and enough gravitas to easily hold her own with her adult co-stars. Spot-on renditions of Maybe and Tomorrow accent her fresh performance, while still holding that nostalgic charm that tugs on the heart-strings of childhood. 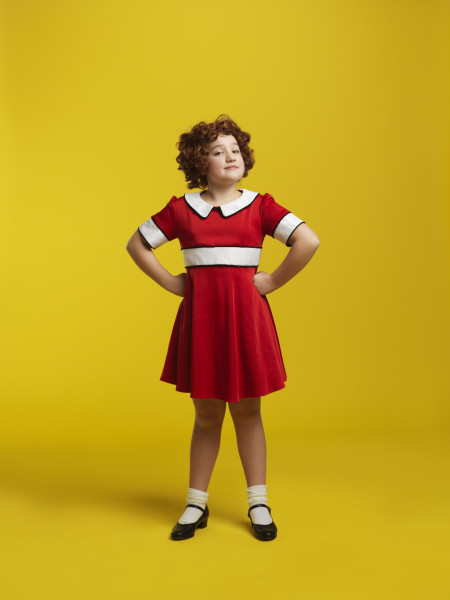 Not to be outdone however, the adult stars rise to the occasion, delivering marquee-worthy performances of their own. Steve Maddock, who stars as billionaire Oliver Warbucks, expertly digs into his versatile bag of tricks, singing his way through N.Y.C., and delivering a very believable, and chemistry-abundant bond with his young co-star.

Villains are always memorable, and Caitlin Clugston’s Miss Hannigan and Mike Kovac’s “Rooster” are no exception. It takes a special kind of actor to pull off a drunkard, who is not completely incompressible, and shares splashes of self-awareness, and Clugston does just that, even harking back to the wonderful Carol Burnett performance from years earlier on occasion. Kovac’s physical comedy brings a delightful pairing, and bears throwbacks to vaudeville.

Backing the onstage performances is the wonderful live orchestra, once again under the direction of James Bryson, who is the founding Musical Director of the RCMT, and has directed all 25 of their shows.

This year’s production has been dedicated to the memory of the late Ed Harrington, former Artistic Director and a founding members of the RCMT company.

Annie is based on Harold Gray’s comic strip Little Orphan Annie, which debuted in 1924. Annie premiered on August 10, 1976, at the Goodspeed Opera House in East Haddam, Connecticut.