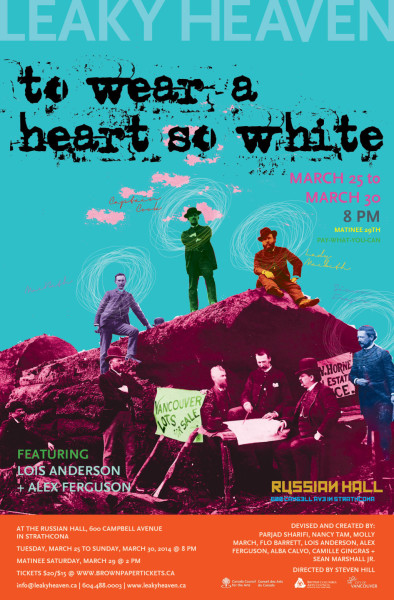 Devised and created by the entire creative team, To Wear a Heart So White is directed by Steven Hill, and features a cast of Lois Anderson, Alex Ferguson and Sean Marshall Jr. Set design by Molly March and lighting and projection design by Parjad Sharifi. Composition and sound design by Nancy Tam. Costume Design by Flo Barrett

Director Steven Hill is the Artistic Director of Leaky Heaven and has directed each of the company’s productions since the formation in 1999. During this time the company has received numerous awards including the Jessie’s Critics Choice for Innovation Award in both 2010 and 2011.With a team of long-term collaborators from a variety of disciplines he has devised both new works and adaptations of classics and follows an interest in devised theatre through rule-based playmaking techniques. He is also a writer and performer and a member of the faculty at Simon Fraser University.

To Wear a Heart So White
March 25 – 30
Venue: The Russian Hall (600 Campbell Avenue)
Advance tickets available. Talkbacks after every performance.