In only a few weeks the CBC Studio 700 building will be humming with the words of two exciting local playwrights. Presented by Staircase Theatre, this evening of theatre will be an introduction to emerging playwrights Scott Button and CR Packer, who will each be featuring a brand new one act play.

Better, by Scott Button: Laurie is a night janitor. Victoria is a marketing executive. On the surface, these two women couldn’t be more different. It seems like the only thing they have in common is that they both work for Symax, a large congolomerate.

At the end of a long workday, they get trapped together in a stalled elevator. Victoria is convinced they’ve never met. Laurie, on the other hand, distinctly remembers a chance meeting they had over four years ago – an encounter which changed her life forever.

Avril, Finally, by CR Packer: In a spare room in the basement a church, three men happen upon each other in an effort to escape the reception of the funeral they have all just attended. Matthew is there to mourn his wife; Greg and Thomas, their ex-girlfriend.

Over the course of the play, these men get stoned, shout, rage, laugh, and piss each other off, in the search for the answer to the question of whether or not we can ever really know our lovers’ inner lives. What does death reveal about them? 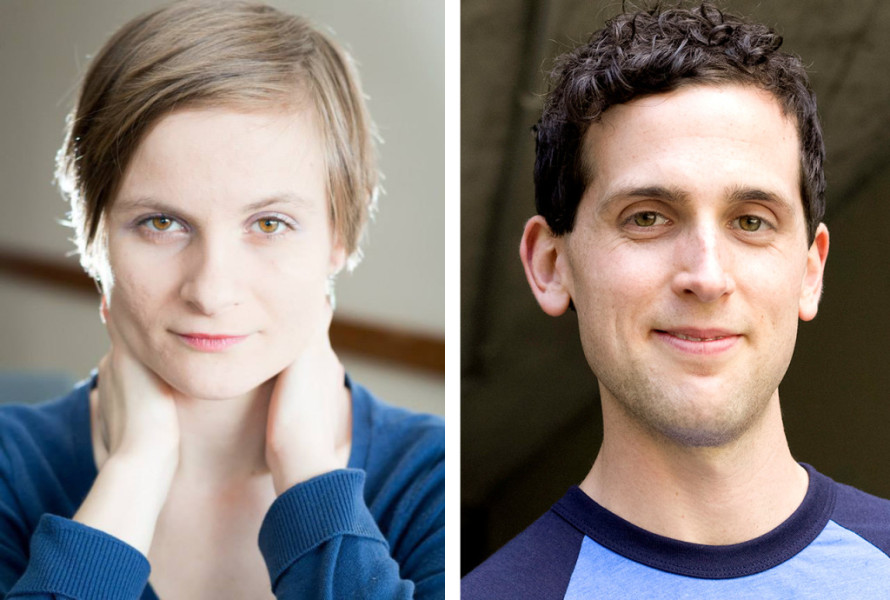 Scott Button is a Vancouver-based actor and writer, and graduate of UBC. He has appeared in Proud (Firehall Arts Centre), tagged and Night Light (Green Thumb Theatre), Speech & Debate (Twenty-Something Theatre). He had his start as a writer at the LEAP Playwriting Intensive at the Arts Club, where he worked on the full-length thriller The Hunger Room. Since then, he wrote the fifteen-minute one-woman show Desire(e) (Pull Festival & Shift Festival), co-created the site-specific experience The Story of You and Me and wrote the comic webseries Ben Jonson’s Vlog.

Movin’ On Up-Staged Readings will take place on Saturday, August 23rd at 8pm at the CBC Studio 700, 700 Hamilton Street. Tickets are Pay What You Can at the Door (suggested $10) or you can reserve a seat by emailing [email protected]. Find Staircase Theatre on www.staircasexi.com or follow them on Facebook: https://www.facebook.com/staircasetheatre