Boca Del Lupo’s genre-pushing micro performance series is in full swing, and up next is Azano. Azano is a tongue-in-cheek exploration of the state of Asian-ness in Vancouver.

AZANO
(EY – ZEE – AH – NO)
Treatise on actualizing the azianic post-racist society of the future by means of ekstatsis, catharsis and social influence
Azano is coming! And coming! And coming… Join an irreverent collective of Vancouver talents as they take us on a profound, hysterical, and anarchic romp through the State of Asianness, the State of Whiteness, and the state of Being Us, circa 2014 and beyond. 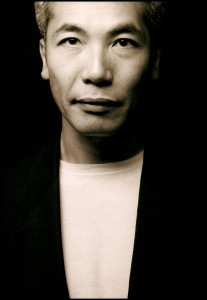 Hiro has been working as an actor for the last twenty-five years, and recently he’s been noticing an interesting shift in his work. Alluding to his work in the film/TV genres, he thinks Asians (especially in places like Vancouver) are on the cusp of being viewed as “honourary white people.” Historically, it’s not the first time something like this has happened – Hiro gives an example of the Japanese-German alliance in World War 2.

That’s not to say that Azano is dry social commentary or angry Asian syndrome. Azano notes the phenomenon but doesn’t past judgement, instead poking fun at race politics, performance art, and the social roles Asians themselves occupy within Vancouver society.

Within the span of 25 minutes, expect wild and kooky humour, cutting edge technology, and a puppet brought to life. Oh, and one more thing – Hiro will wear a fundoshi sometime during the play. Judging from his character’s dedicated twitter feed, he’s still trying to decide on the colour.