Theatre Plexus’ new production SCRATCH is like an itch you can’t reach. While there a few beautiful parts contained within the play, the whole doesn’t touch a deeper emotional place.

SCRATCH is from Toronto playwright Charlotte Corbeil-Coleman and brought to the West Coast by emerging company Theatre Plexus. Directed by Hardline Theatre’s Genevieve Fleming, who previously directed a much-loved production of classic Of Mice and Men, the cast boasts six actors/actresses on a small stage. I emphasize actresses, because this is a play written, directed and largely performed by women. Women have conversations with each other on topics other than men, and the validity one woman’s storytelling agency starts and ends the play. So far, so good. Alison Bechdel would most certainly approve.

But while SCRATCH is theoretically good on paper, there’s still an inconsistency to the whole that leaves me scratching my head – but not in the way that Corbeil-Coleman originally anticipated. For a weighty script on women’s agency, grief, death, coping and lice, it’s all pretty… boring. And I think it may have to do with the writing. 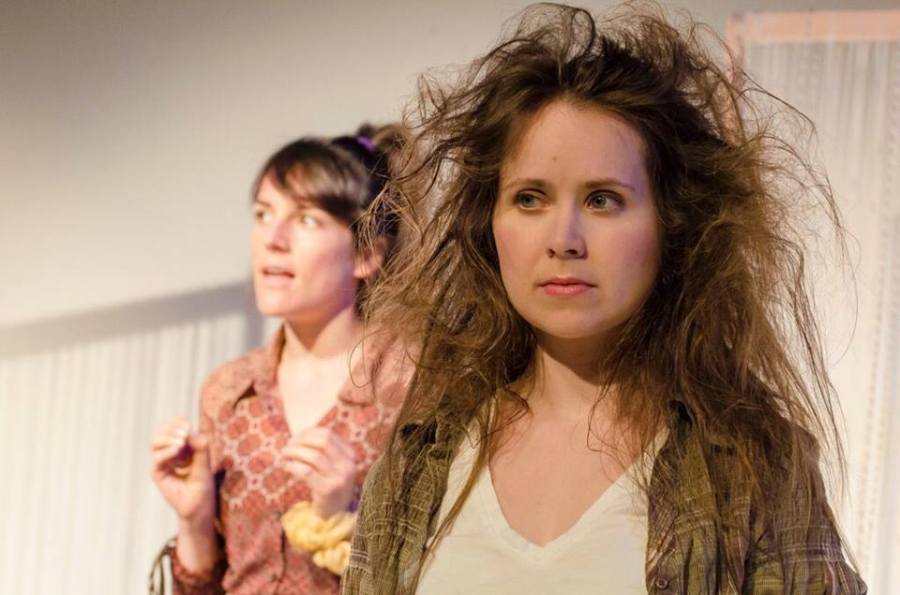 Characters spend much of the time in dialogue with either themselves or one other person, meant to show the effects of a dying family member on everyone involved. Much of the time however, they’re cutting each other off or speaking over one another. Corbeil-Coleman seems to be pantomiming the way we talk, but the imperfect imitation means aren’t any sparks, and very little connection. Best friend Madelyn (Stephanie Izsak) may have the most zingers, and focal character Anna (Theatre Plexus’ Artistic Producer, Caitlin McCarthy) develops a truly painful mastery of the head scratch, but energy and motion aren’t quite enough to make up for the weaknesses in the script.

SCRATCH, then, is technically competent but doesn’t connect. All the actors are set to a sharp staccato; rarely, are moments of reflection and humour allowed to breathe. And that’s too bad, because there are some funny moments hidden inside, but with the 90-minute, no intermission, whirlwind of a play, there aren’t many pauses. This may have worked if SCRATCH was going for the comedy bent, but disastrous to a self-entitled “moving and candid coming-of-age tale about grief from all angles.”

There’s a scene near the end that probably lends some notoriety to the play, and made me sit up from my half-stupor, but it was too little too late, and the energy died down just as quickly. (Aside to the audience: Haha, see what I did there.)