It’s been a phenomenal year (or 52 weekends) for The Weeknd. The Canadian idol scored a number one album and a pair of number one hits, graced the cover of Rolling Stone magazine and headlined at a slew of summer music festivals, including Vancouver’s own FVDED In The Park.

The Weeknd (born Abel Tesfaye) was once a fan of anonymity, rarely granting interviews and refusing to include photographs of himself in the liner notes of his first few albums. He told the New York Times that, early on, his co-workers at American Apparel would groove to his records in the store without realizing the music was his. But the singer seems more at ease with his superstar status these days, happily posing for pictures with fans at shows and even joining Taylor Swift onstage for a duet in front of 55,000 screaming fans (more on that soon).

Tesfaye brings his “Madness Fall Tour” to Rogers Arena on Wednesday, December 2, but before he takes the stage, we’ve crunched his numbers and came up with some pretty interesting stuff. Nothing important – just some random trivia to impress your friends and annoy your co-workers with.

17 – age at which The Weeknd quit high school

Tesfaye was kicked out of high school in grade 11 and, after being transferred to a different school across town, dropped out altogether and moved out of his mother’s house. He soon began pursuing a music career, first as part of a hip hop duo called Bulleez N Nerdz and later as a solo act. When the money started rolling in, he bought his mom a house in Toronto, but says “I think me getting my diploma would make her much happier, though.”

As a budding musician, Tesfaye was desperate to get his music to the masses and started recording music at a rapid clip. With no record deal on the horizon, the singer began posting songs on YouTube before releasing three full-length mixtapes (“Echoes of Silence,” “House of Balloons,” and “Thursday”) online for free. “A lot of artists started doing things faster and quicker after that,” he says. “Justin Timberlake dropped two albums in a year, Beyonce dropped a surprise album. No one can do a trilogy again without thanking The Weeknd.”

3 – number of albums released by The Weekend

That’s not a typo – The Weekend is a rock band hailing from London, Ontario who released a string of moderately successful albums in the early 2000s. Their songs were featured on soundtracks for “Freaky Friday,” “D.E.B.S.,” and the FOX series “Simple Life 2.”

3 – number of superstar collaborations featured on “Beauty Behind The Madness”

It seems as if everybody’s working for The Weeknd these days. Tesfaye’s No. 1 album includes duets with British singer Labrinth, ginger heartthrob Ed Sheeran and moody chanteuse Lana Del Rey. Tesfaye had previously collaborated with Grammy nominee Sia on a song from The Hunger Games: Catching Fire soundtrack and a handful of tracks on Drake’s 2011 “Take Care” album.

In a recent magazine cover story, Tesfaye recalled meeting Swift at a Bel-Air mansion after last February’s Grammy ceremony. Swift gushed over his music (apparently “The Morning” is one of her favourite songs) and, as Tesfaye tells it, “the whole time she was talking, she was kind of, like, petting my hair? And of course I’m not going to be like ‘Hey, can you stop?’ I mean, it felt good!” The admiration is mutual – Tesfaye calls himself a fan and performed a stellar version of “Can’t Feel My Face” with Swift at a New Jersey concert in July.

The singer performed a duet with Ariana Grande on SNL in 2014 and returned to the stage as the main draw two months ago. Tesfaye performed his monster smashes “The Hills” and “Can’t Feel My Face” despite being asked by the show’s producers to perform album track “In The Night” instead. Rolling Stone reported that he declined as “In The Night” is tough to sing live and he simply wasn’t ready (he’s since added the track to his concert setlists).

Rarely does an artist release two singles simultaneously out of fear of them cancelling each other out, but The Weeknd isn’t exactly a fan of convention. “Can’t Feel My Face” enjoyed a four-week run atop Billboard’s Hot 100 chart, only to be knocked from the summit by his very own “The Hills.” With that feat, Tesfaye joined a small, illustrious group of artists to replace themselves at number one on the chart including Outkast, Boyz II Men and The Beatles.

More random chart facts? Yes please! On July 25, 2015, The Weeknd became the first artist to own the entire top 3 on the Hot R&B Songs list – “The Hills” rose to No. 2 that week, joining “Can’t Feel My Face” and “Earned It” at numbers 1 and 3, respectively. Robin Thicke is the only other artist to place two songs in the top 3, doing it with “Blurred Lines” and “Give It 2 You” in 2013.

On November 4, Live Nation announced that The Weeknd’s entire fall tour was officially sold out, a full month before his Vancouver show was set to take place. But as everybody knows, nothing is ever really sold out in the age of StubHub. Floor seats are going for as much as $1,200 on the resale site, while nosebleed seats are going for about $140.

There, now don’t you feel a little smarter? Be sure to check Vancity Buzz on Thursday for our review and photos of what promises to be an epic night with The Weeknd. 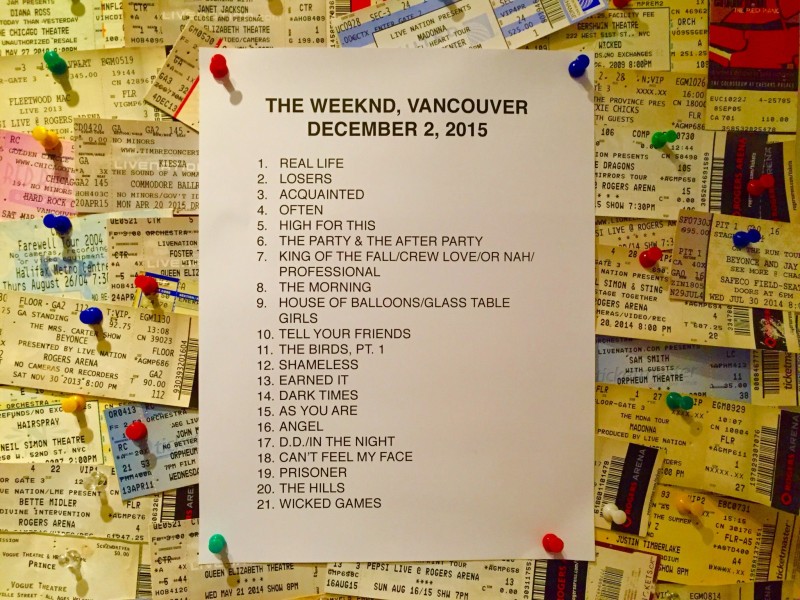