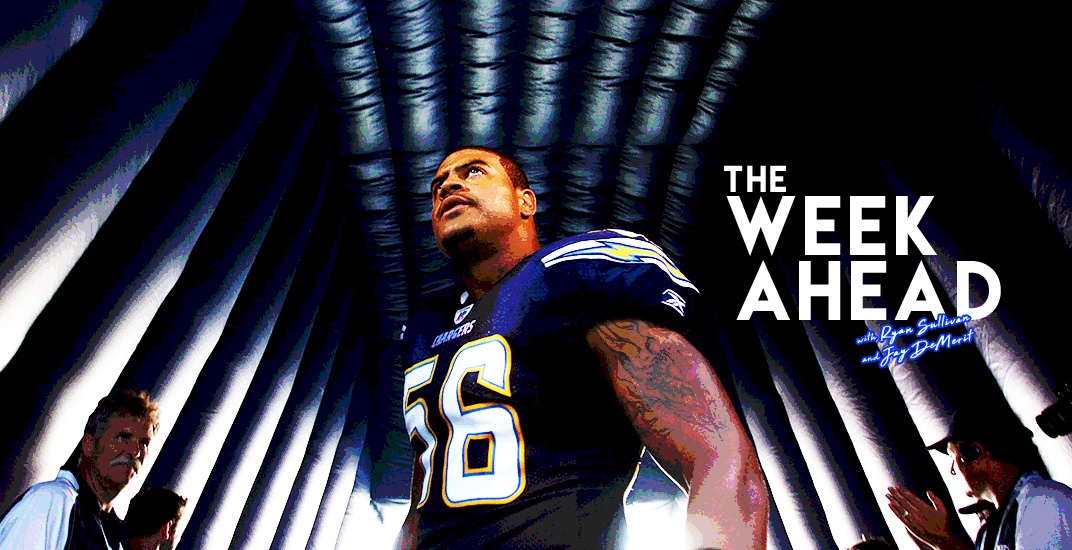 The Week Ahead Podcast returns for its 17th episode with myself (Ryan Sullivan) and former Vancouver Whitecaps captain Jay DeMerit. This week we feature three-time NFL All-Pro and Pro Bowler Shawne Merriman. This interview is also courtesy of Burrard Physiotherapy.

Once again, the show and interview (starts at 4:54) was featured LIVE on our Green Men Facebook page here/below. (You may have to join the page to see the video)

After chatting with Shawne for a good 20 minutes about his picks and predictions for the biggest game in sports, we dove into a few other topics in our ‘Headlines’ segment. What constitutes a good sports fan was a main issue, but number one on our list – again – was of course the ‘Jackass of the Week’.

We honestly didn’t have to look to far as this fan has been absolutely demolishing the internet for the past few days. His run-in with a post has given him a hell of a lot of notoriety lately and he’s since become a local legend in Philadelphia (see below).

Once we were done talking idiots and concluded the rest of our ‘Headlines’ segment, we then touched on the biggest matchups you should be watching for this week in the NBA, NHL and Premier League.

Jay and I then handed out a $25 GC to Yagger’s Restaurants and Sports Bars for answering our live Week Ahead trivia question. It was an easy one, but it also brought fourth a wager idea that will take place on our next episode.

Jay being a Watford man and myself being a Chelsea man, I decided to give him +2 odds for the big Chelsea-Watford matchup on Monday. If Chelsea wins, Jay sings a song of my choosing and vice versa if they lose.

Win or lose, our pipes still probably won’t be as good as former guests Jordan Subban. Didn’t hear that episode? No problem, here that is.