The Canadian vocal quartet have a rich collection of operatic musical renditions in their wake. Now the multi-platinum band, consisting of Remigio Pereira, Victor Micallef, Fraser Walters and Clifton Murray are venturing in a direction that showcases the depth of their talents as musicians.

Eight tracks on their new album “Under One Sky” are written or co-written by The Tenors. While they have written their own songs before, never has a single album contained so many original tracks. The JUNO-award winning group will also introduce fans to their first ever music video to Lean On Me. Filmed in Vancouver, the video will tell a story and take fans on a visual experience they haven’t yet seen from The Tenors. 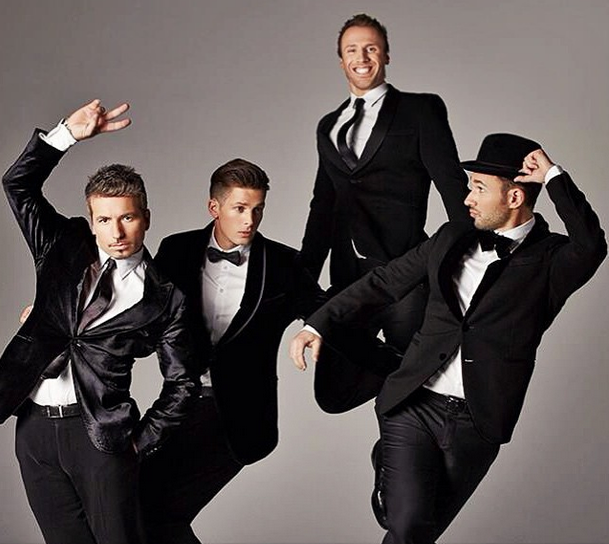 You guys have always had an extremely strong fan base, why do you think that is?

Clifton: We make it about the music and the live performance. That’s where you can really connect with people on a deeper level, opposed to when they see you on TV. When you connect on a live performance that seems to be a bond that sticks.

Were you at all worried that you were tampering with that loyalty by introducing more original songs than usual and a music video?

Clifton: This new album is about the message we want to send out. The response has been extraordinary. We’ve been #1 on iTunes Pop Charts for five days in a row now. It goes to show that as artists, when you look inside yourself and represent yourself truthfully, that’s usually the best way to build a fan base.

How do four guys find a common theme to write about and a way to say it that everyone agrees with?

Clifford: We agree to disagree.

Fraser: I think it continues to be something that we learn about. No one has the distinct answer. The most important thing is that it’s not a dictatorship, it’s a democracy. We do have heated, creative discussions sometimes, little “mini-battles,” but we’re very proud of what has come out of all of those creative sessions for this album.

Remigio: It takes the group to a whole other level when you get together in a house, lock yourselves up, and write. It’s amazing for musicians to see their offspring go out, and especially to see the fans react the way they do.

Did you just refer to songs as “offsprings?”

Remigio: [laughing] We birth each one through the canal of our experience.

Victor: We’re not a regular singing group. We sing, we do our thing, but we’re also songwriters. In this album, we embraced it. With that, you need to tell a story. We’re doing Lean on Me because it’s a beloved song but it’s also our interpretation of the song. There is one of part of the song that is entirely new. We want to show the world that we’re a band, we’re creative people and we’re not just singers. We want to show [those aspects] in the next chapter of The Tenors by using video.

Live performances have contributed largely to your success. Do you have any rituals before a performance or do you get onstage without a second thought?

Clifton: It’s important to have a ritual and connect. Ours is to get in a circle and connect with eachother and remind ourselves that for someone in that audience it could be their first, or it could be their last Tenors concert. It gives you a real sense of responsibility to treat each show like it could be your last as well. We give the best performance we possibly can.

Fans who have followed you throughout your career probably feel like they know you pretty well, so I want you to say something that fans would be surprised to know.

Fraser: I don’t know if I’ve ever said before that I like riding motorcycles.

Victor: I also don’t know if I’ve ever said this before, but once for some pocket money growing up I had to deliver Avon for my mom. It was really embarrassing.

Clifton: I have a dying wish to squirrel jump, which is very dangerous and I could die doing it. I want to soar down the side of a mountain and use my arms as wings. As a child I used to always dream about flying.

The Tenors kick off a 70-city North American tour in September, including stadium shows in Canada. Visit www.tenorsmusic.com for concert listings.