It’s been a busy few months for our friend Colin Easton over at The Stranger Project 2014. “I hit a milestone, and now have over 5,000 people following along with the stories of the people I am meeting daily around Vancouver,” said Easton. “All tolled, I’m at nearly 7,000 people across Facebook, Twitter, Tumblr, Instagram and my website. Admittedly, the Instagram account has kind of fallen off the rails – not every platform is conducive to story telling!” Easton tells us.

Another fun milestone was unknowingly talking with a Vancouver Whitecaps FC player. “It wasn’t until we were half through the chat that I realized who Russell [Teibert] was. He was really kind and told a great story, regardless of the fact that time was limited for him. Then the Whitecaps picked up the story and ran it on their website. It was a a most unexpected surprise.” You can read the Vancouver Whitecaps story on their website.

“I had a great opportunity to be a guest on the FloatHouse.ca ‘Vancouver Real Podcast,’ which is about local people in the community making a difference. It was an honour and we had a lot of fun talking about The Stranger Project 2014,” Easton said. Listen to/watch the podcast here.

“One of the most surprising situations was a an email I got from a lady who had found my project through a Christian Church podcast where the pastor had heard my interview with CBC radio’s Sook-Yin Lee, and then he talked about the project the following Sunday in his sermon. Something I never expected to be a subject matter in a church sermon,” Easton laughed.

Easton also got in an interview with CKNW’s Phillip Till, shortly before Till retired:

Let’s not forget that Easton has also being going out and meeting a stranger everyday, finding out about that person’s story, and then writing about it. It’s no wonder Easton feels 2014 is speeding past him!

Some of the most popular stories of the summer: 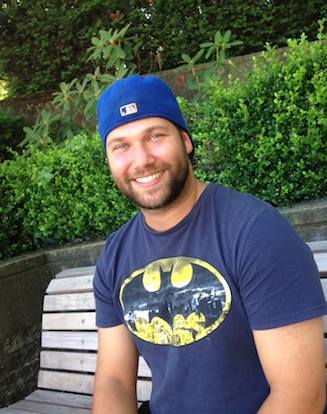 July 31, 2014 – Ted was sitting on a bench, smoking a cigarette. His bike was in front of him. I told him about my project and asked if he would chat with me. “That sounds like a great project. I’m meeting someone in a little bit but we can chat until then, sure,” he said. Ted was meeting a friend nearby at one of my favourite taco places, so we talked taco for a minute or two. Priorities.

Ted was born in Montreal, Quebec. “I have three sisters. Two older and one younger. When I was twelve, my mother and sisters and I moved to BC (British Columbia). My parents had separated and my mother had ties to BC because of her family. I’m still close with my father and go back to Montreal to visit him,” said Ted. “I think growing up in a house with four females really shaped the person I’ve become. I’m a sensitive guy, and I’m the peacemaker. I don’t like confrontation, if people are arguing or there’s friction, I’m the guy that wants to smooth things over. Even when watching movies, I’m easily moved or affected by what I’m watching,” says Ted. We agreed that there could be worse influences, like if it had been three brothers. We both laughed at that. 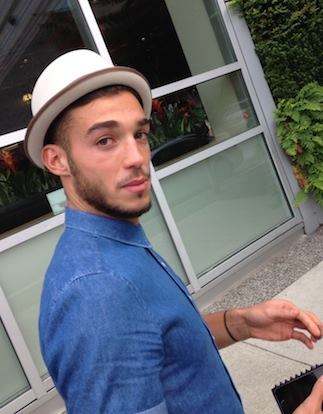 July 20, 2014 – Today was one of those days that I recognize if I wasn’t so passionate about this project, I might have skipped the day. Maybe it was the rain and clouds, although I enjoy rain. I was happy to have a lazy day off, and bond with my couch. Alas, if I don’t get groceries, I don’t eat. The first two people I approached, both named Dave, were willing to chat, but not comfortable having a picture taken. I got my groceries, went home and had a nap. Always satisfying.

Somewhat refreshed, I headed back out to find today’s story. And buy cookies. Cookies punctuate a good nap with a deeper satisfaction. I spotted Russell at a deli, eating and looking at his phone. I walked right past him and then decided to go back. I told him what I was doing and asked if he would chat with me. “I’m sorry, I can’t,” he said. I thanked him and said goodbye. As I turned and walked away, he called me back. “You know what, I’ll talk with you.” I told him I understood that if he wasn’t comfortable, he didn’t have to chat with me. “No, it’s okay, I have a few minutes,” he said. I showed him the Facebook page and we had a conversation about the project and why I was doing this. He thought it was a good idea. 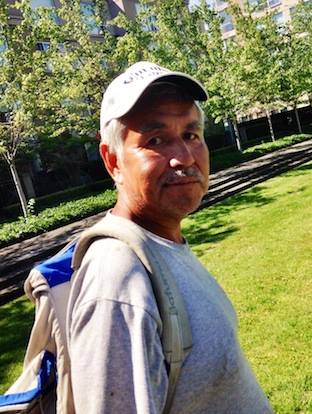 July 13, 2014 – Don was sitting on a bench in the corner of a very sunny park, tucked in under the shade of tree. There was a beer can at his feet. I asked him if he would chat with me and gave a short explanation of what I am doing. “I’m sorry,” he said softly, “I didn’t understand a word you just said.” I asked him again, slower this time, if we could chat. He told me that he was just about to leave, but if he “had another beer, I’d sit a while longer.” I told him I didn’t have any beer with me. He asked me what kind of things I wanted to talk about. I showed him the Facebook page and he curled his upper lip, saying “I’m not a photographic kind of guy.” I didn’t say anything. “But sure okay, we can talk for a few minutes.” 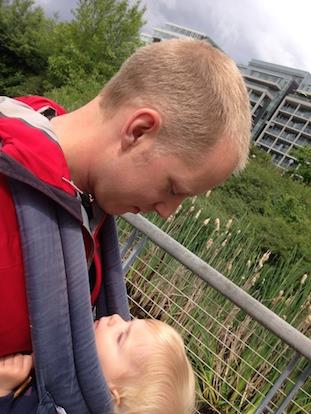 June 15, 2014 – Johnathon was walking down the street toward me when I spotted him. I had a destination in mind, but as he passed me, I thought I’d ask him to chat. My hesitation was because of him carrying his child. My interest was because of him carrying his child. I explained what I was doing, and he agreed to chat. He was walking home and rather than keep him and his daughter standing on a noisy street, I offered to walk with him towards his home. We meandered our way down toward quieter side streets. Ironically enough, we ran into Mary from Day 135, and we stopped for a minute and chatted with her. I introduced Mary to Johnathon and without missing a beat, she asked if his daughter was my grandchild. It wasn’t until about 30 minutes later that I realized that that would mean she might have implied Johnathon was my son! I’ll laugh about that for many years to come! As we walked, Johnathon’s daughter was enjoying an Arrowroot cookie, and seemed fascinated with my beard.

August 20, 2014 – I was walking home from downtown, when I spotted Dallas sitting on a bench on the seawall at the foot of Davie Street. He had earphones on but didn’t seem to mind when I approached him and asked him to chat. Dallas also told me he didn’t need to see my blog or anything. We talked a little bit about our views on approachable versus unapproachable people here in Vancouver, and in other cities.

Dallas was born at Vancouver General Hospital. “I grew up in East Vancouver,” he said pointing to the east of the city. “I have one brother. My parents didn’t stay together long, and then my mother remarried and I have two sisters.” Dallas went to nine different schools. “We were poor and kept moving around. My brother and I were kind of bad asses. You know, single parent, my mother was at work and two boys, left alone. We managed to get into some trouble, but nothing any worse than maybe getting caught shoplifting from a corner store. Typical boy stuff,” he said. 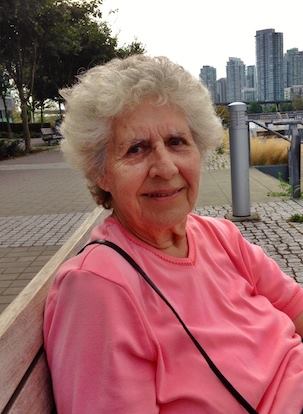 August 18, 2014 – I was sitting on a bench on the seawall, enjoying the view and a cool beverage. A lady walked by just as I was, of course, checking my email. I smiled at her and said hello. She smiled back, said hello and continued walking. I thought of inviting her to sit and chat, but I didn’t. Five minutes later, as I continued walking along the seawall, I saw the lady who had returned my greeting, sitting by herself on a bench. I walked over and asked her if she’d chat with me. She asked if I really wanted to hear all of her ‘stuff.’ Yes, yes I do.

Joyce was born in Toronto. “There were seven children in the family. Four girls and three boys. I was the third child. Having four younger siblings meant there was always something to be done. Everyone helped out. It was just the way things were done,” said Joyce. “I went to one grade school, and everyone who was in my class, were in the same class all the way through school. There were 45 kids in the class. Some of the kids were from the next grade up. They were the ‘smarter’ ones, and they sat in our class. They required less attention, and because there wasn’t enough room in their class, they were in ours. We lived in the heart of downtown Toronto for many years, always in a house. When I was older, the family moved out to the suburbs,” she said.