As we connect with our friend Colin Easton, the creator of The Stranger Project 2014, it seems he’s getting busier and busier. Even with the end of his year-long project just a few weeks away, the momentum continues to pick up.

“The past couple of months have really been a whirl-wind, to say the least,” Easton told us. “I presented two completely different TEDx talks, just a week a part. And last Friday, I presented at PechaKucha New Westminster. Of course, I’m still meeting a stranger every day, and then writing about that person’s story.”

“We’ve just launched an Indiegogo campaign to crowdfund a short documentary that is being made about The Stranger Project 2014,” said Easton. ’Not A Stranger‘ is the story of one mans pursuit of real world human connection for 365 days.

Easton has also being working on a couple of other projects, but we couldn’t get him to comment beyond just teasing us. “I have some plans for what’s next. I’m still finalizing a few things,” he said. We look forward his next steps!

Here are a few of the most popular stories of strangers that Easton met during the fall, for The Stranger Project 2014: 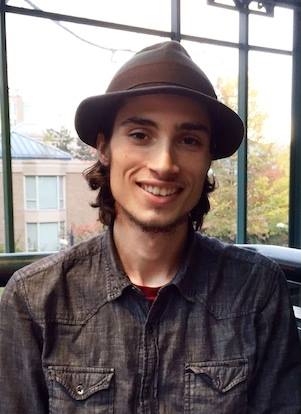 November 04, 2014 – Tucker had what looked like a mobile office set up on the coffee shop table he was sitting at. Computer, notebook, pens, hot drink, backpack, headphones and even an indoor hat and an outdoor hat. He had no hesitation in talking with me whatsoever, closing his computer and moving his chair to face me.

Tucker was born in Knoxville, Tennessee. Knoxville was host to the World’s Fair in 1982, just before it was Vancouver’s turn in 1986. “My father was in a relationship before he met my mother and had two children previously. My mother wasn’t supposed to be able to have any children, but they seem to have figured out a way and I came along. So I have two half-siblings, both of them are quite a bit older than I am. I saw them mostly in the summertime,” he said. His parents didn’t spend much time together and it was Tucker’s mother that raised him. “My mother was fairly poor. She sold everything she had, and rented the cheapest apartment she could find in Marysville (Tennessee) because it had the best schools in that district. She wanted me to have a good education. I was taking violin in Grade three. It was certainly an advanced approach to education.” Tucker would go on to play the violin throughout his school years. “I went to high-school in Knoxville,” he said. 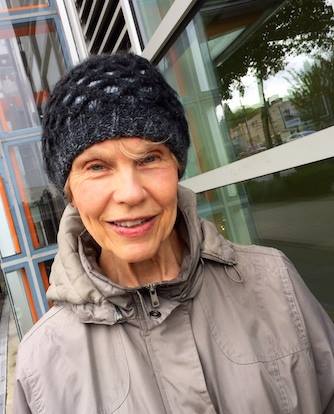 October 04, 2014 – I chatted with Layne as we both waited to cross the street. She was wearing bright red and white striped, knee high socks, with her trousers tucked into them. I complimented her on the choice of socks. She smiled at me and said she had just been to an event and she was wearing them for that. Layne was just coming from the annual ‘Walk for Farm Animals’ which raises awareness for animal welfare. (*Fact Check – see link below.) Once we got to the other side of the street, I figured I’d ask Layne if she’d chat with me for The Stranger Project. I had already gotten a sense she was outgoing and very personable. She agreed on the condition that it would only be five minutes. Another rule about to break… 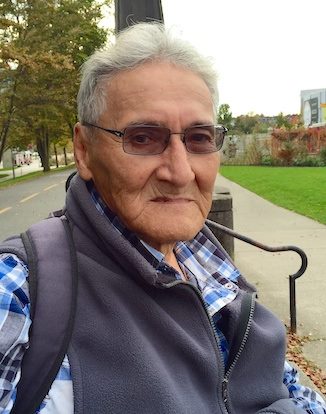 October 19, 2014 – Dennis was sitting by himself, looking out over the waters of False Creek. He had one leg up on the bench he was sitting on, and I made a comment about how comfortable he looked. “Well, I’m just sitting here enjoying he view. It changes so quickly! I’m sure there are at least two new towers that weren’t there yesterday,” he said, laughing with a wide toothless grin. When I asked him if he’d chat with me, he replied, “Sure, I don’t have anything else to do right now.” I made sure he’d be okay with me taking his picture, and we were set.

Dennis was born on the First Nations reserve, Fisher River, in Manitoba. The Cree First Nations reserve is located about 190km north of Winnipeg, Manitoba. Dennis is the ninth child of twelve, comprising of six girls and six boys. “My parents were both Christians and we were raised as Christians. We went to church on Sunday’s. My parents both carried their faith throughout their entire life,” he said.