The stop in at O5 Tea on West 4th Ave brought us to speak with Rosie Priest. Together we enjoyed some of O5’s Balhyocha Noeul while chatting about the store and the wonderful teas they serve at the long bar. o5 is the perfect spot to enjoy a warming cup of tea on a rainy day, so it’s definitely a good spot to check out during the inevitable downpours that Vancouverites expect in coming months.

Balhyocha Noeul, by the way, is a Korean oolong. As with all the teas at O5, it has a fascinating story behind it, as Rosie was kind enough to share. The tea is traditionally drunk around the equinox, between the change of seasons when it’s believed that the body hasn’t quite adjusted and is still in its summer phase. The tea has a warming and soothing quality, gently awakening the “fire in the belly” with a deeper, less astringent flavour.

According to Rosie, Pedro (the owner) really gets to know the farmers who produce the tea that o5 sells. He meets them, learns about the teas and their stories, and even lives with the farmers for a few weeks. Pedro does his own in depth form of The Stop in. Since the farms aren’t large plantations, they usually sell directly to markets and local buyers, so Pedro’s approach is an intimate way to familiarize himself with the teas and their origins. The passion for tea involved in this process really shines through in O5’s staff and store. 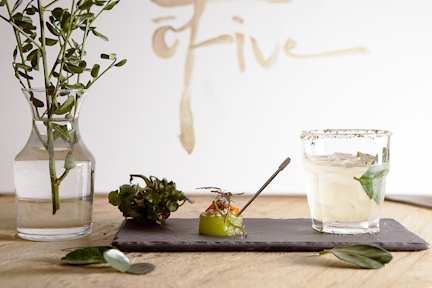 Here’s the stop in interview:

How did you stop in to the world of tea?

I’m originally from England, where they drink a lot of tea, and my mother lived in India for a few years and is really into chai tea. I came here looking for good places to drink tea and found o5. I thought I knew a lot about tea, but there’s so much more to it! My tea knowledge has just exploded since starting here.

What kinds of stories are behind the teas here?

Our tea mostly comes from Taiwan, South Korea, Japan, and China. Some teas are really traditional, like matcha and pu’er, which have been made in the same way for centuries. Others, like Korean teas, aren’t as traditional because Koreans didn’t originally produce their own tea. By developing their own methods, like wok-frying their leaves instead of steaming them, their teas get a much different flavour.

Is there a story behind the name o5 Tea?

Yes! The “O” comes from “Origin”, like where the tea comes from, because we don’t add anything to our teas; we serve them as the farmers intended. The “5” is basically the 5 elements that went into creating the teas: earth, air, water, fire, and void.

One thing we stand by here is that teas taste like what they were grown in and around, and we always want to preserve that and stick to the basics by not messing around with things.

How do you make tea more accessible here?

There’s such a wide variety in teas, and people have such different palates, so the events help open the shop up to people who have different tastes and are looking for different things.

Some events are for learning more. For example, at our “Tales from the Backroad” events, people are invited to come try rare teas that are from exclusive locations, are from rare harvests, or were gifts from farmers.

Overall, O5 allows not only a chance for people new to tea to learn more,  but also for tea buffs to come and find unique varieties that they enjoy. If you come in and don’t know anything about tea, there will always be someone who can help you find something.

Come check out o5 Tea at 4th Ave Tasting Oct. 11 with Tangoo. Experience the eclectic tastes of tea history, come out for the modern italian of Trattoria, and dance to night’s end at the Bimini. Tasting, dinner and drinks are included for $60.