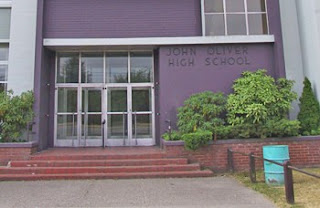 On April 1, East Vancouver’s John Oliver Secondary will be hosting its 6th Annual Multicultural Show. They may be the John Oliver Jokers (and the event even falls on April Fools’ Day) but JO showcasing its student body’s diverse talent set is no joke. The show will feature dancing, singing, karate, a fashion show, and even a lion performance.

JO has come a long way since its reputation as a gritty East Van school which used to graduate more gangsters than University entrants each year. The transformation began a few years ago when stringent skip rules were put in place by Principal Kevin Moore for students cutting class. In 2008, Gino Bondi was named the Principal and began expelling bad apples left, right and centre. He emphasizes a community and learning environment. Celebration of Excellence assemblies are held to honour achievements in academics, attendance, and sports. Statistics are communicated to students, with the latest showing a dramatic decrease in failed classes. And no, there hasn’t been a single false fire alarm, smoke bomb, or fight this year. WTF? Yea that’s what I said.

JO raised $14 475 for their Hope for Haiti campaign and was well publicized on CBC National. Over 4 000 socks were collected in the Socks in the City campaign, and almost 3 000 cans were collected for their annual canned food drive. 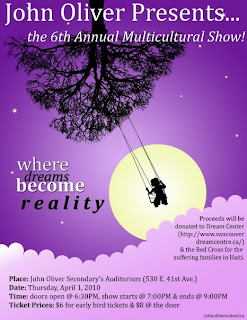 It’s a situation of nature vs. nurture. And being a former student of JO myself, I know the environment was less than ideal for getting ahead in life. I somehow wiggled my way into University after a stint in College, but I know a lot of talent was wasted and many kids never made it through. It is encouraging to see the transformation taking place and I only expect greater things to come from this school.

Check out the great talent JO has to offer at their Multicultural Show. Purchase tickets at the main office or several nearby Community Centres and Elementary Schools (proceeds go to charity). For complete information check out their Facebook page.