The Satellite Gallery’s latest exhibition, “Moyra Davey: Ornament and Reproach”, is both simple and complex. It is simple because it focuses on everyday objects – often placing them in unusual states so we recognize their beauty or see them in a different light. But it is complex because there is a social commentary hidden in the exhibit’s subtext, and I will do my best to unearth it.

The best example of an everyday object being placed in an unusual state is her photo series of an American penny. It chronicles the gradual decay of the object, and it is profound because we are reminded that money, like all things, is impermanent. We all know the value of money, but how often do we consider that like all things on this planet, coins and bills decay with time? Upon seeing these photos I was reminded of a rather poignant moment from my childhood: I was rooting through my coin drawer and noticed that a bunch of pennies had started to rust, and that the rust had bled onto the bottom of the drawer. This moment was poignant because I realized that like the food in the fridge, money also had a shelf-life. I had never thought of money as anything else but an object you use to buy more objects, but now it was clear to me that it possessed other characteristics. Another everyday object that is placed in an unusual state is a tombstone. This tombstone is in an unusual state because a tree has fallen on it, and the photos are fascinating because the fallen tree forces us to actually examine the tombstone in detail, and we realize that this everyday/common object is actually a well-crafted piece of art. Davey wants us to remember that these everyday objects are also ornaments that beautify our surroundings.
But what about the previously mentioned social commentary? What is Davey reproaching? The thing she seems to be criticizing is our tendency to let unwanted or unloved objects and structures decay, and seems to be condemning us for being so wasteful in our building habits. A perfect example of this is the photo series on newspaper kiosks. These kiosks are either overloaded with goods (which are all going to be disposed of by the end of the day) or are abandoned and in a state of decay. Although many of the operational kiosks are shown with their owners working inside them (giving the series a human element) it cannot be ignored that these structures are rather ugly and tend to not be in the greatest of shape. What is the point of constructing such garbage in order to create more garbage, she seems to be asking. It gives us pause to consider all the construction that is going on in Vancouver. How much of it is necessary, and how much of it is just garbage? That is something that only time will tell. 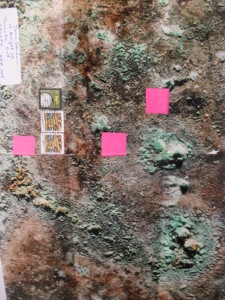