The area of Vancouver’s Downtown Eastside known as Railtown will soon have another destination for diners. The Mackenzie Room, located on the north side of Oppenheimer Park, is poised to welcome guests into their retro-chic casual fine dining restaurant.

The duo behind The Mackenzie Room is husband-and-wife team Andrew and Katie Jameson, who are bringing a multi-layered sense of family to the restaurant and the neighbourhood, and, as timing would have it, their own lives; the couple is expecting twins in September. Named for Andrew’s side of the family (Mackenzie is his grandfather’s last name and his own middle name), The Mackenzie Room joins a short but growing list of dining destinations in a part of the city that is most definitely transitioning. 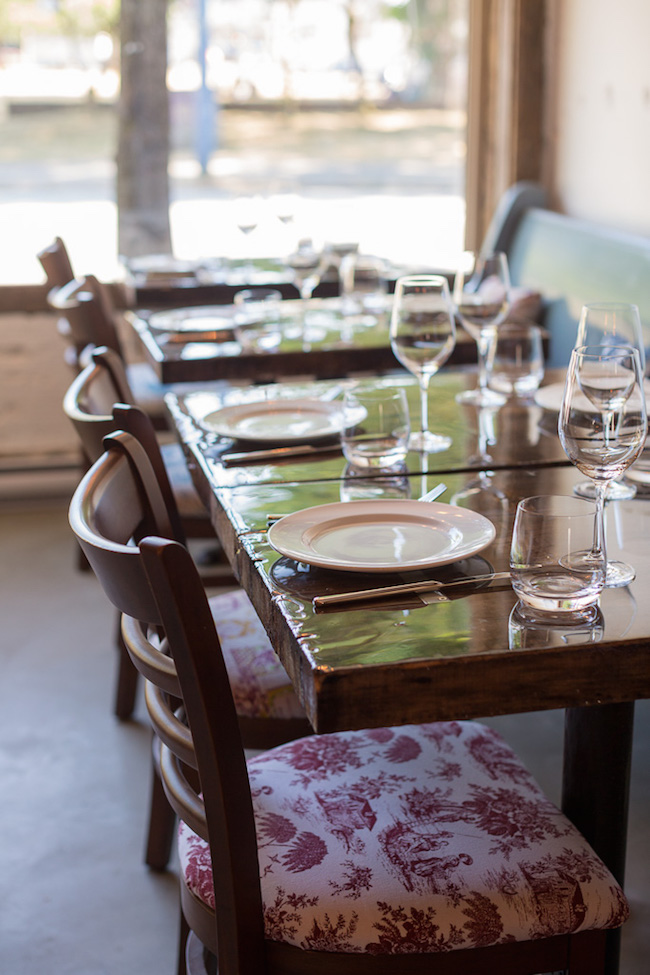 The Jamesons envision their restaurant becoming part of the community’s fabric, rather than a curiosity that pressures the neighbourhood to change to suit them. “There are thriving businesses in the area,” notes Andrew, listing off neighbours like Cuchillo, Ask For Luigi, and Belgard Kitchen, adding, “we are lucky in a lot of ways in that we aren’t the ones forging the trail.”

The goal is for The Mackenzie Room to slip organically into the community. One way that the Jamesons are letting their passion for the restaurant industry, and The Mackenzie Room, guide them is their goal to operate without pretension, and to offer diners casual elegance, with the emphasis on casual. 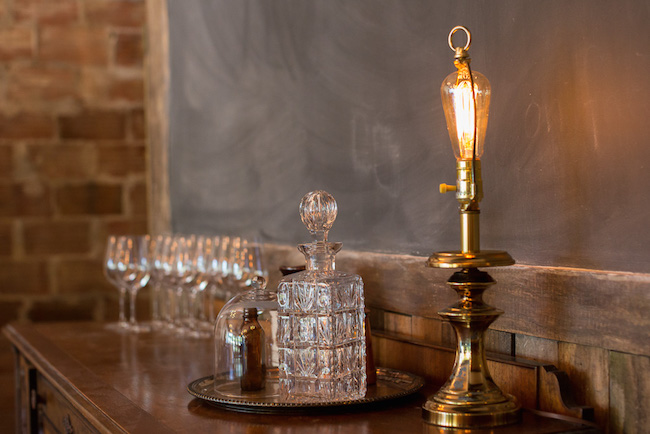 The restaurant is small but bright, though the furniture has a distinct retro and raw feel. The couple did much of the manual labour of transforming the rundown former Parke Place Coffee Bar–a diner–into their vision of The Mackenzie Room, literally peeling back years’ worth of walls to expose the cement and brick that ultimately was refinished to be their own walls.

The space “wasn’t frozen in time as much as it was time worn,” observes Andrew, as the restaurateurs chronicle the layers of decay that made the furnishings of the previous tenants unsalvageable. “We’re keeping more of the building’s character,” he adds, “rather than that of the Parke Place.” 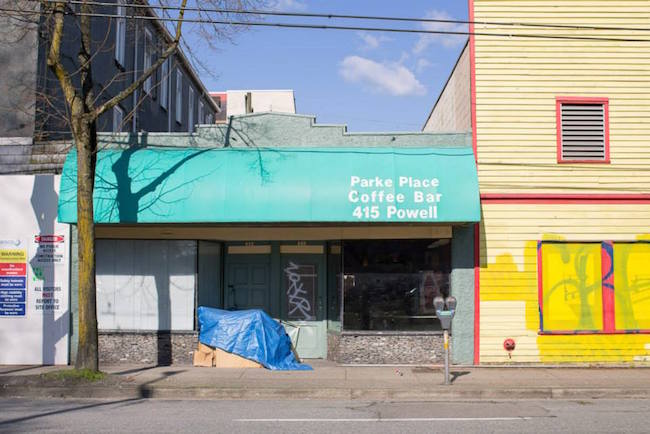 Some of The Mackenzie Room’s furniture and decor came from their own families, Katie points out. And the beautiful 10-seater wood bar was hand-selected by them from a purveyor’s barn in Abbotsford. Andrew did much of the assembly himself, all while holding down another full-time restaurant job.

Joining the Jamesons to make The Mackenzie Room a reality is chef Sean Reeve, who recently was seen on Food Network’s Chopped Canada taking home the $10,000 prize.

Though the Jamesons and Reeve are all British Columbia natives, the trio got to know each other working in the restaurant industry in Toronto. Reeve, who cites Southern comfort fare and classic French and Mediterranean cuisine as his chief points of reference and expertise, has worked in several high-profile Italian eateries in Vancouver, Toronto, and Montreal, but was ready to head home to B.C. to execute his own food.

At the Mackenzie Room Reeve will preside over an open kitchen with a view of every seat in the house. The plan is to have a chalkboard menu with just a few nightly options based on what is fresh and in season. Diners can expect to find dishes that may take them on a journey of discovery that allows both Reeve to challenge himself culinarily and the eater to explore new tastes. Reeve intends to cook with less-utilized proteins (elk or squab, for example) and use the produce from local farmers. 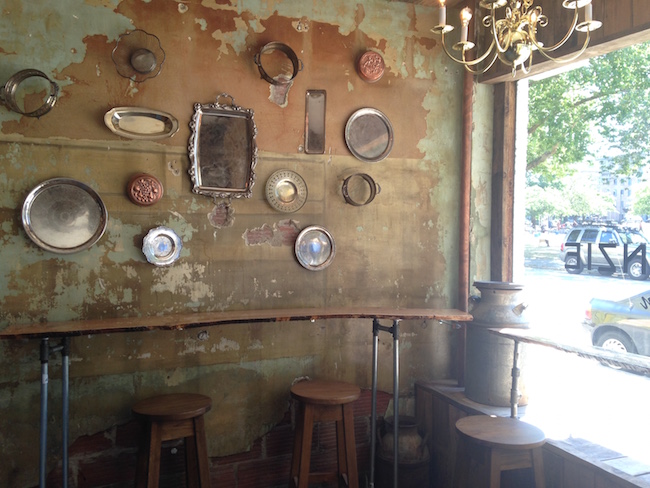 Reeve says part of his joy as a chef is creating food that firstly evokes a memory for the diner, and secondly that gives them something to think about. However, as the Jamesons see The Mackenzie Room as an approachable, friendly, and welcoming venue, Reeve intends his food to be the edible iteration of that vision.

The Jamesons acknowledge that Vancouver diners are often driven by the concept of value, which is why their menu will allow guests to put together the kind of meal they are most comfortable with in terms of pricing.

Diners can opt to do share plates, individual entrees, or even a more robust tasting menu they expect to be priced at around the $45 mark. Because of the ever-changing nature of their menu, The Mackenzie Room hopes guests opt to return numerous times for the varied dining experiences their menu accords.

Value extends similarly to the drinks menu. There will be about eight to 10 B.C. wines in each of the red and white categories, with per-glass prices in the $9 to $12 range, and selections that allow The Mackenzie Room to spotlight lesser-known labels as well as provide guests with more familiar options. A tight and short cocktail menu will include progressive concoctions that will change out regularly, along with punchbowls for sharing, and beer lovers will find six regional brews on tap. 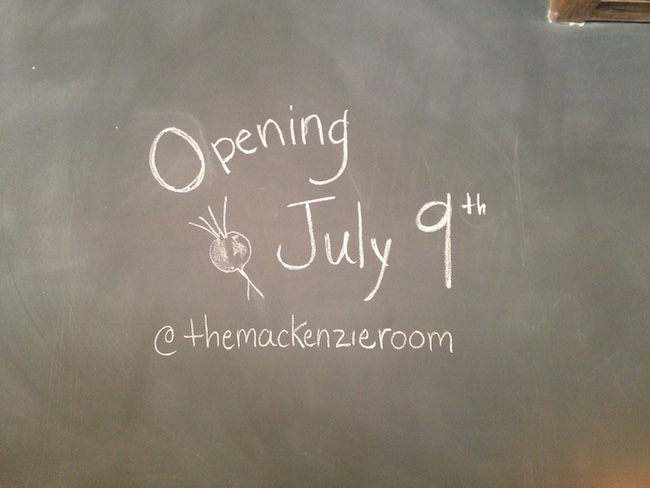 The Mackenzie Room is set to open July 9, and will begin with dinner service from 5 to 10 p.m. Tuesday through Sunday, likely expanding to include lunch service in the fall.