A burgeoning restaurant trend these days is the niche restaurant: witness the proliferation of vegan and vegetarian restaurants that have cropped up lately, farm-to-table, poutineries, places that serve nothing but grilled cheese. The Mac Shack in Kerrisdale, just entering its second year of business, is one of these. It serves–you guessed it–nothing but mac ‘n’ cheese.

As a concept, it’s kind of brilliant. Mac ‘n’ cheese is the quintessential comfort food, after all: loaded with carbs, oozing with delicious cheesiness. Kids love it. Grownups feel nostalgic for it. And this is real mac n’ cheese; the kind your momma used to make, not the kind with the orange powder from the blue box that we all OD’d on in university.

The space is very family-friendly, located in the heart of Kerrisdale. It’s clean, open and bright, with lots of windows, a black-and-white tiled floor, white quartz tables and reclaimed wood. It’s somewhere between fast food and table service: you order at the front, but your meal is brought to you. Prices for entrees range from $7 to $14. 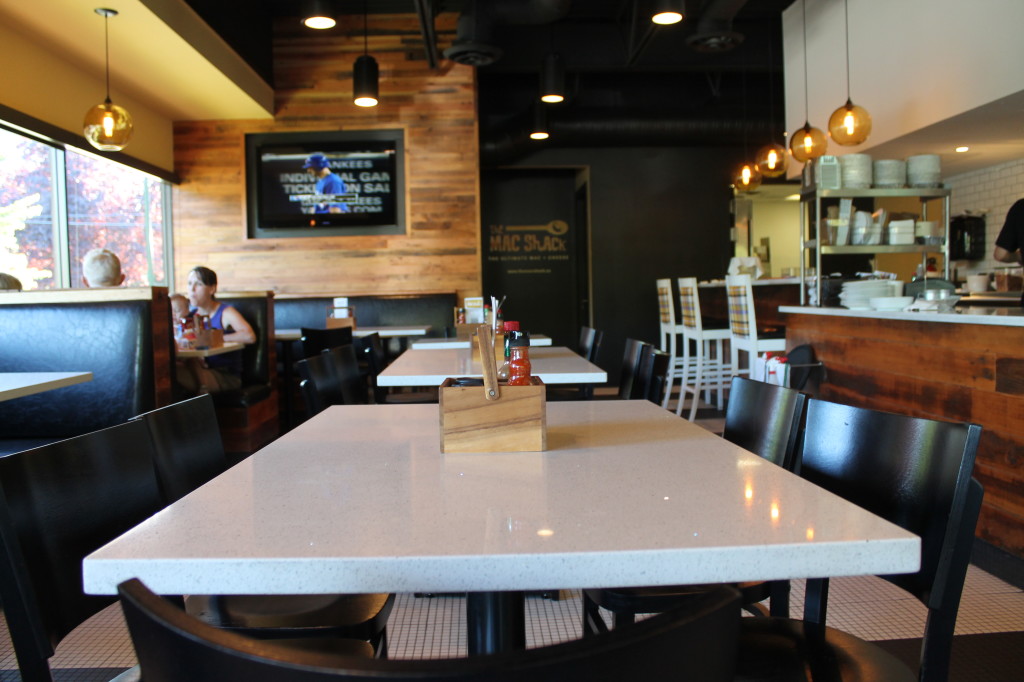 Owner Chris Tsakumis is no stranger to the restaurant business. His family has been in it for quite some time (his brother owns the Quattro brand), but this was a whole new kettle of fish, and they’ve made lots of adjustments and changes since opening, like adding salads and refining and honing the menu. 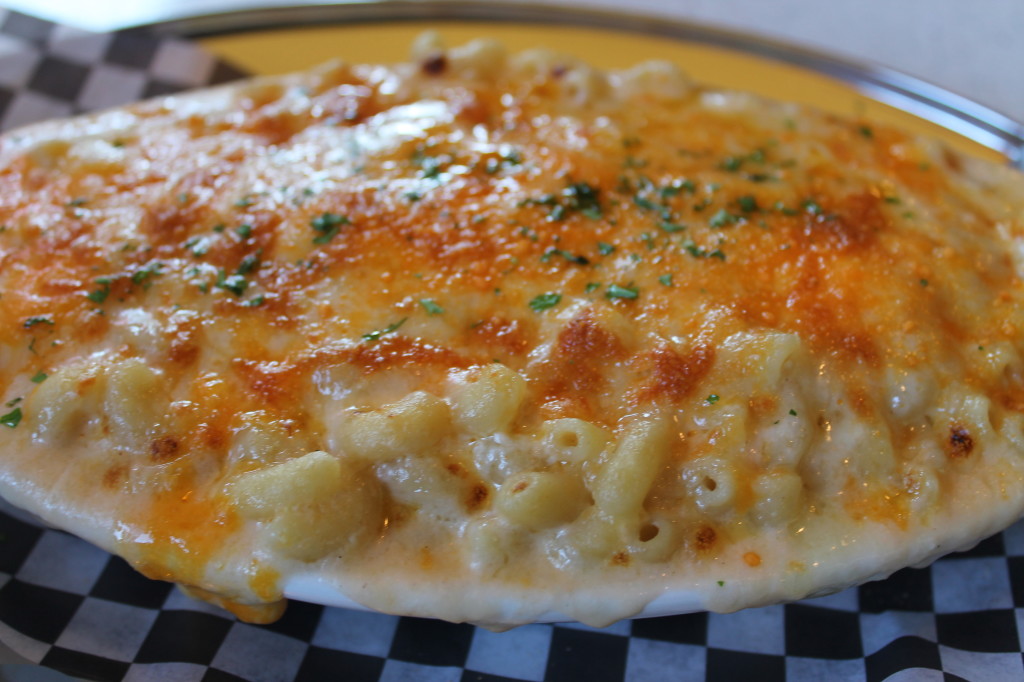 The final product works. You can either order one of their favourites, like the Classic, the Four Cheese, Bacon Cheeseburger (popular amongst the guys–go figure), Lobster mac, Creamy Pesto Chicken or Veggie. They even have a mac ‘n’ cheese grilled cheese (which I MUST go back for). Or you can take full control and order à la carte.

You have three choices for pasta: white, whole wheat or gluten-free, and three choices for sauce: white (also in gluten-free), tomato or rosè (a mixture of the two). And then, there’s the cheese: from the traditional cheddar to a more refined aged cheddar, to chèvre, blue cheese, asiago or swiss gruyere. You can also add on meats like bacon, chorizo, ham, tuna and/or vegetables like broccoli, mushrooms, tomatoes, peas, hot peppers or caramelized onions. You can even do toppings like panko or, the ultimate in luxury, truffle oil. The mathematical possibilities boggle the brain. 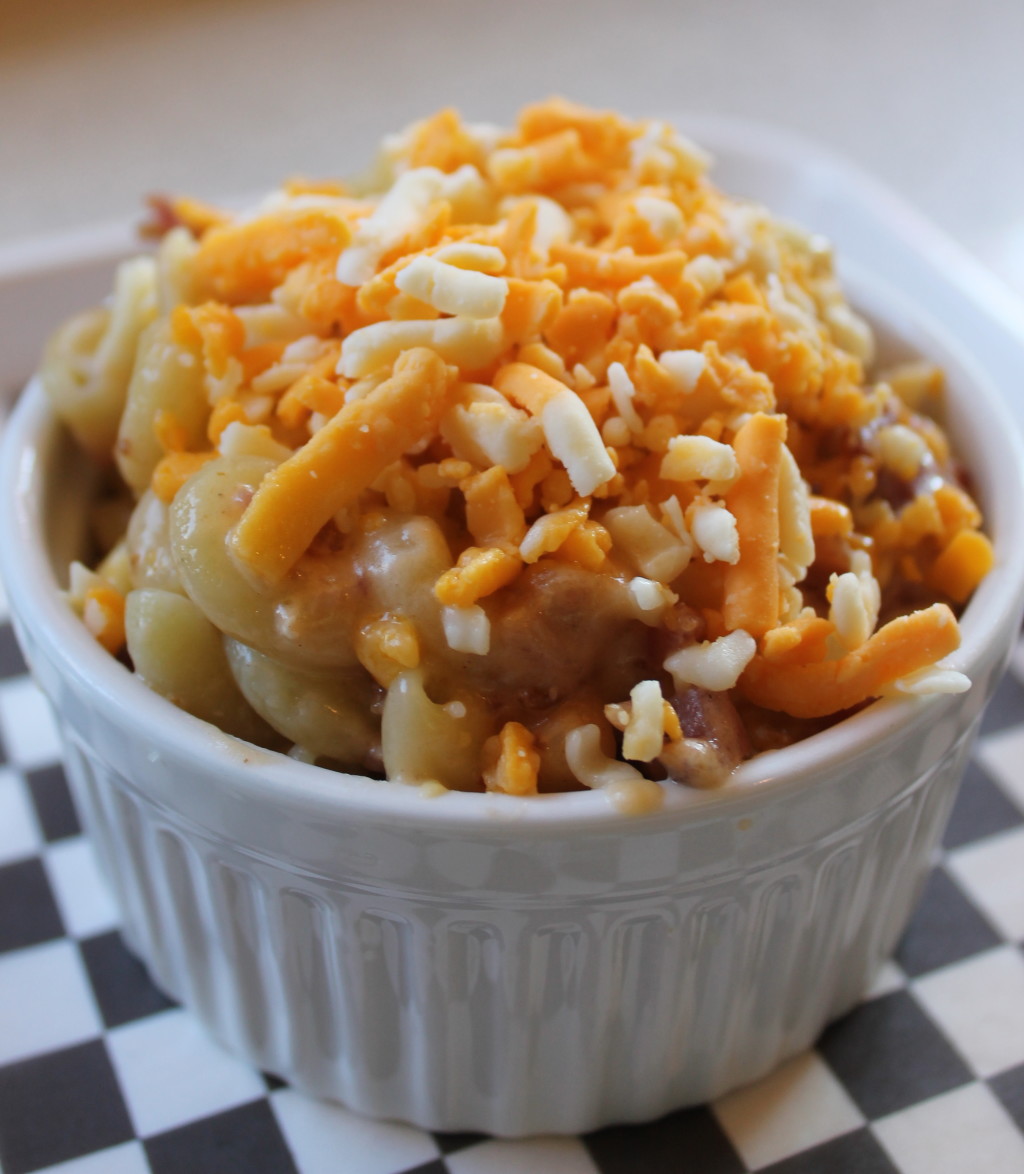 When I visited last week, I had a traditional mac ‘n’ cheese with chèvre and aged cheddar. It was sharp, creamy and delicious, with melted cheese on top. My 10-year-old sidekick had their Mini Mac; a kid-sized portion of mac ‘n’ cheese (with bacon, of course), a drink and a cookie. When I asked him for his review, his response was “awesome, marvellous and cool!” In other words, it was a hit.

I love that those with food restrictions don’t have to suffer. Gluten-free pasta and sauce options are offered (the pasta is made from quinoa), as well as a vegan option with tomato sauce and Daiya cheese.

Carbs get a bad rap, but it’s scientifically proven that they raise our serotonin levels and make us happy, so why fight it, right? It’s for your mental health!

Opening a restaurant in Vancouver is hard. We’ve all heard the stats: 75 per cent of restaurants fail in the first year. This one has not. And you have to give full props to the owner for really listening to his customers and making adjustments accordingly. They have also been very active on social media, and that has helped to drive business. There is talk in the works for a second Mac Shack closer to downtown in the near future.

Disclaimer: the author was a guest of the owner.