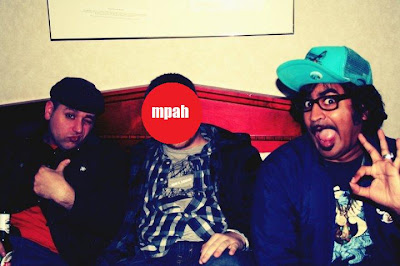 There were a couple of things I learned after seeing KING KHAN and BBQ SHOW at the Biltmore last night. One, that seeing them live can kick any bad mood, anyone who says they don’t like to dance and put a smile on any sour face face, Stephen Harper needs to go to a KING KHAN and BBQ SHOW show. The second, very important lesson I learned is that when you’re less than 10 feet away from a band you don’t throw a beer at them mid-song. I can’t imagine many bands would enjoy that KK and BBQ are no exception. Right in the middle of one of their many blitzy “doo-wop garage rock” songs some smart individual made this mistake causing front man King Khan to stop the song and throw the beer back with a few more while the guilty party was escorted out of the Biltmore.
Shortly after that before KK and BBQ were able to get in to another song some fearless goofball ran on stage trying to grab the mic and defend the beer thrower once he was tossed out KK and BBQ joked about it then finished up what was definitely one crazy dance filled evening.

Despite the fact that after a few songs in most of the Biltmore had cleared out, what was once packed front to back dwindled down to about half the dance floor to enjoy an incredibly energetic and fun set by KK and BBQ. You could not know a single song and still have a great time dancing with a few dozen strangers while watching King Khan wearing a blue wig with slinky ill-fitting dress and BBQ in his Turban. However if you were familiar with the Montreal and Berlin based rockers you were treated to a great selection of songs spanning all of 3 of their albums, sing-a-longs with songs like “Zombies” and “What’s for Dinner?” had the indie kids, punk kids and just plain weird kids singing and jumping along while Khan pouring out of his dress stumbled around on stage and in the crowd numerous times.

For as much as they come off as just a couple of guys joking around putting on goofy out-fits for attention and not taking anything seriously they can really belt it out. BBQ, who takes his spot near the back of the stage sitting down while playing the bass drum, guitar and singing showed more than a few times that he has some wicked pipes. Sounding like what I’d imagine you’d get if the Rolling Stones and Beach Boys had a baby and gave it a Mohawk, KK and BBQ ripped through songs like “Treat Me Like A Dog” “Why Don’t You Lie” and title track from the last album “Invisible Girl” Even though these guys had just visited Vancouver in November every person in the audience was ready to party again and there’s no party quite like a KING KHAN and  BBQ SHOW party (even beats an S club party) The only beef I’d say is that the party was literally missing the song “Animal Party” a song in which King Khan is visited by numerous Animals from Elephants to Pigs and a party breaks out. Not sure if this had to do with the shortened set thanks to Captain Beer Thrower Genius or just the fact it was 1 in the morning and they’d been playing for almost 2 hours. Either way it was definitely quite the experience and something I think everyone should enjoy once before they die, The KING KHAN and BBQ SHOW make Lady Gaga look like an elementary school play.

Right before the show I was lucky enough to join King Khan and BBQ in their hotel room for a quick interview…read if you dare.


VanCity Buzz: So you guys were just in Vancouver what brings you back so soon?

King Khan: They (SCION) made a new car and they dedicated it to us

BBQ: It’s the kick off for the new car, it’s made of toilet paper and soap

VCB: Did you guys get a free car for doing this show?

KK and BBQ: No

KK: Did it scare you?

VCB: Yes, yes it did. I kind of felt like I got an STD after listening to it

VCB: If I had to explain what this song was about to my grandma, what would I tell her?

KK: You would just tell her to close her eyes and just dig in there. No, actually it’s not really a song you want to play for your grandmother, unless I don’t know… your grandmother wears a thong.

KK: Tell her to take her teeth out and just give her a Jell-O pudding pop.

VCB: You guys are on the road a lot, if you ever get in a bad mood or fight, what gets you out of the bad mood?

VCB: Did you just watch that movie?

BBQ: Last time we got in a fight we went to Marine Land and I was allowed to like kiss the whale on the head

KK: That’s where the song Tastebuds comes from

VCB: What’s your favorite thing to do in Vancouver?


VCB: Do you guys go full out at Wreck Beach?

BBQ: I wear my Bra

KK: I wear a Bra…down low. I switch it up


VCB: Were you guys pissed off they didn’t let you play at the closing ceremonies for the Olympics?

KK: We did play…but no one showed up

BBQ: It was the Paralympics

VCB: What did you guys think of the Olympics?

KK: The sound of one hand clapping

VCB: It was pretty good, Canada won some gold

BBQ: Here’s a real answer, I don’t think anyone should fund anyone else who’s just out for personal gain. That’s all that shit is, “Ohh I’ve been training for 20 years and I’m using your money just so I can come in 30th place” Fuck you, fuck sports!

VCB: What’s the major difference between crowds in Europe to the crowds over here in North America?

BBQ: Women have hairy armpits and their teeth are shit.

KK: They have moles in their teeth which is considered an aphrodisiac in some places.


VCB: For everyone out there on Twitter or blogs who might read this interview what’s one last thing would you say to them?

KK: What is the past-tense of Twitting?

BBQ: If I had any advice or anything to say …

BBQ: Yeah, get out there and ski

KK: I don’t understand what Twitting is, I don’t care, we don’t even have cell phones either. We’re like that movie Back To The Future


VCB: What if you get lost?

BBQ: The old fashioned way, you buy some M and Ms and you lay them in a trail…old fashioned. You ever see that movie E.T.?

KK: Or you buy some pigeons to escort you around.

BBQ: Remember when you used to totally get pigeon escorts? They were fucking expensive…

KK: That’s another difference in France, instead of prostitutes
they have giant pigeons

BBQ: If you’re in to shitting and stuff like that.


VCB: Back to the song Tastebuds I guess?

The review and interview were conducted by our musical correspondent Mpah. Sounds like he had a blast!