DramaNatrix hosts the Canadian premiere of this family friendly musical that’s set in 1920s New York City. The show is based off of the Pararmount Pictures film called IT, which stars Clara Bow, and reinvents the show in a musical medium as it was originally a silent film.

The IT Girl is the story of Betty Lou Spence, a charming department store clerk who wins an advertising contest to find the girl with the most elusive quality they can only define as “IT.” Other shenanigans occurs along the way but in the end, Betty Lou Spence gets the man. 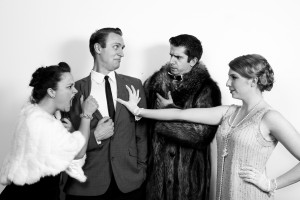 DramaNatrix is a fresh, new production company on the Vancouver musical theatre scene. Their mandate claims that they want to “engage young urban audiences with fresh modern musical theatre while also emphasizing on creating more roles and opportunities for women in the industry.” With The IT Girl Musical, they definitely succeed at this as 70 per cent of the actors in the show are women.

As Betty Lou Spence, Katie Purych, gave a well-rounded performance. She was charming, funny and has great pipes to boot. It seemed at moments she could have gone a little further with her character but it was a great characterization nonetheless.

Dimitrios Stephanoy stole the show as Monty Montgomery IV. His comedic timing and strong voice suited the part so well that it seemed as if it were written for him. He stepped into the shoes of Monty with gusto and was definitely the most memorable performance of the night.

The best voice of the show is undoubtedly Stephanie Liatopoulos. She flounced around the stage in her blonde wig with the ample amount of camp appropriate to the genre and has the pipes to make her portrayal all the more entertaining. 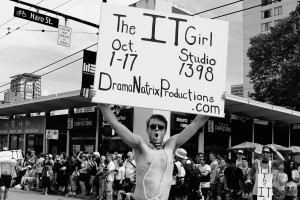 Ranae Miller, Paige Fraser and Ryan Nunez served as the comic relief of the show. Although they weren’t in main roles, their comedy added to the show in a major way, making them standouts of the ensemble, not to mention their great vocals.

Choreography is by Erika Babins and is very fun while maintaining a sophistication that suits the era. The specificity of the choreographed movement really showed the research Babins did while creating the movement. I just wish that the performance space had been larger as the choreography yearned for a larger venue, especially in the group numbers.

It’s sometimes difficult to pull of an era-specific show but thanks to the gorgeous costume design by Marci Jade Herron and a simple but effective set, the cast of the IT Girl Musical pulled it off in a believable fashion. 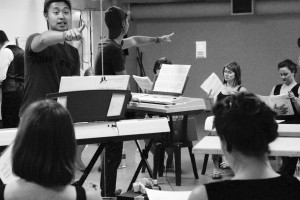 Some of the ‘silent movie’ moments seemed a little forced but whether that’s based on the direction or intimacy of the playing space is up in the air, in my opinion. This show begged to be on an even slightly bigger stage and deserved much better acoustics than Studio 1398 can provide.

Overall the IT Girl Musical was a great premiere for a new production company like DramaNatrix. Even though it wasn’t perfect (as shows seldom are), it was a fun night with some talented leads, jaunty choreography and beautiful era costuming.

You can catch DramaNatrix’s The IT Girl on Granville Island at Studio 1398 (1398 Catrwright Street, Vancouver) running until October 17. Tickets range from $20 to $25.