Hudson’s Bay, formerly known as The Bay, continues in its evolution after recent years of major changes and innovations within the Canadian retail landscape. To celebrate its past, present and much-anticipated future, Hudson’s Bay is launching a new, streamlined logo to reflect the modernized brand while maintaining its deep-rooted history.

The downtown Vancouver Hudson’s Bay store was often the main store my parents would bring me to. We would get much of what we needed through The Bay, whether it be our furniture, our Christmas tree, our clothing, my toys, kitchenware and much more.

I still have fond childhood memories of venturing through the store when it was still busy and in its heyday. This was during the time in the early and mid-1990s when department stores were still a “stable” one-stop retail destination for many urban Canadians, when the Hudson’s Bay Company was still very much a cornerstone of the Canadian retail industry.

Over the past decade and a half, the Hudson’s Bay Company has been facing heavy competition and significant challenges with maintaining the traditional concept of a one-stop, broad-selection store. Like the ill-fated Woodwards, this was once a store that used to sell groceries not too long ago. The Bay was losing retail market share due to its aging stores and the lack of any innovation to respond to new societal trends.

To fight for its own survival and to prepare itself for a barrage of new competition in the Canadian marketplace (such as Nordstrom), over the last few years the company decided to reinvent itself and proceed with a massive makeover. It sold its Zellers chain to Target and used that new capital to reinvigorate the Hudson’s Bay brand and renovate its flagship department stores.

Its flagship downtown Vancouver store has received the largest renovation budget, larger than the renovation budgets for its flagship stores in Toronto and Montreal. Hudson’s Bay has so far spent more than $40 million on renovations to its downtown Vancouver store, which have included a rejuvenated building exterior look, the opening of one of the largest TOPSHOP and TOPMAN stores in the world, the creation of The Room, and the new Men’s store on the 6th floor. The renovations have also been complemented with the introduction of numerous new international brands.

The renovations and new retail options to the flagship downtown Vancouver do not stop here. Among future additions include a rumoured large UNIQLO store located in the basement SkyTrain level – space that it will rent out to the renowned Japanese retailer. It also has plans to extend its unique brand to Vancouver International Airport (YVR) through the opening of a specialty retail store in the terminal under the banner of the “Hudson’s Bay Trading Post.”

Let us also not forget that Hudson’s Bay was also the official clothing and merchandising supplier for the Vancouver 2010 Olympics. Of special note, it was responsible for the wildly popular “red mitten” phenomenon during the Games. Its role for the Olympics gave Canadians an excuse to flock back to Hudson’s Bay in droves. Talk about marketing bliss.

The Hudson’s Bay modified logo and visual identity appropriately marks a major milestone of recent significant changes to the 1670 founded company. In addition, the return to its old name – the Hudson’s Bay – symbolizes the company’s intent to not stray too far from its rich historical past.

The introduction of new international retail brands, the renovated stores, the new modified logo and the nod to its original name; altogether, the new and streamlined Hudson’s Bay is making a big push to make itself relevant to Canadians once again.

And I think it is working.

Do you shop at the Hudson’s Bay Company? Have the recent major additions and renovations made it a premier retail destination in downtown Vancouver? Let us know by commenting below.

This is the company’s first major logo rebrand since 1965. Hudson’s Bay is returning to its classic full name with a striking word mark that will be visible on all marketing and media materials, online and in-store displays, plus an additional full-dress version used exclusively for packaging and select materials. A marriage between yesterday’s history and tomorrow’s vision, the full-dress logo celebrates Hudson’s Bay’s heritage with the coat of arms, beautifully redrawn by Canadian Mark Summers and a sleek design developed by Lipman.

“We’re very proud to say that Hudson’s Bay is continuing to advance in 2013, not only with our new business ventures, but with our updated look,” says Tony Smith, Creative Director, HBC. “We’ve taken what is a very meaningful two-pronged approach to the redesign: maintaining our heritage while modernizing the new Hudson’s Bay Company. It’s a throwback to our remarkable history and an image for the direction we’re heading in.”

The HBC logo has become a national icon, sustaining years of historical significance while allowing creative change to reflect new phases in the company’s saga.

Pre-1965, Black Letter script represented the Hudson’s Bay Company’s identity. In a time before the digital era, this now definitive logo was one of the most commonly used. HBC developed a highly recognizable and distinguished name, transcending time and upholding a devout following.

A movement to modernize and an expansion into Québec motivated the next phase of branding toThe Bay in 1965. The Bay, with the B boldly emphasized, designed by Lippincott & Margulies, was part of a “folk-friendly” transformation after consumers began referring to Hudson’s Bay Company by its short-form name. The signature logo spanned more than three decades as the symbol for Canada’s longest-standing company. 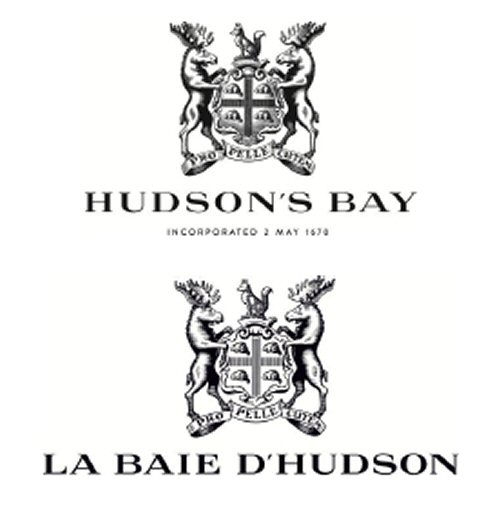 Today, Hudson’s Bay is a representation of true Canadian accomplishment. The last few years have been a defining period, from the creation of The Room, to the launch of Canada’s first Topshop and Topman, to the renovation of multiple stores and expansion into the world of ecommerce.

Signaling these remarkable undertakings are the updated brand emblems; a stylish word mark for in-store, online, marketing and media materials as the new, true logo and a full-dress coat of arms for packaging and select signature use. With so many significant recent changes and a lush history as a major player in the Canadian business environment, Hudson’s Bay’s new branding is a testament to the company’s longevity and promising future success.

Source: Hudson’s Bay Celebrates Its Past, Present and Future with Modern New Logo