Some of the crew behind North Vancouver’s Anatoli Souvlaki are on a mission to bring the old world flavours of Greece with a modern flare to Vancouver’s Yaletown with their new dining venture, The Greek by Anatoli.

Taking over the space vacated by Good Wolf, The Greek will showcase the authentic ingredients and dishes of Greece but with an infusion of contemporary chic-ness.

At the stoves is Executive Chef Scott Robertson, last at The Westin Resort & Spa, Whistler. The Greek will offer a selection of small plates (mezze) and promise they won’t be doing the “carb overload” of many typical and more casual Greek eateries. 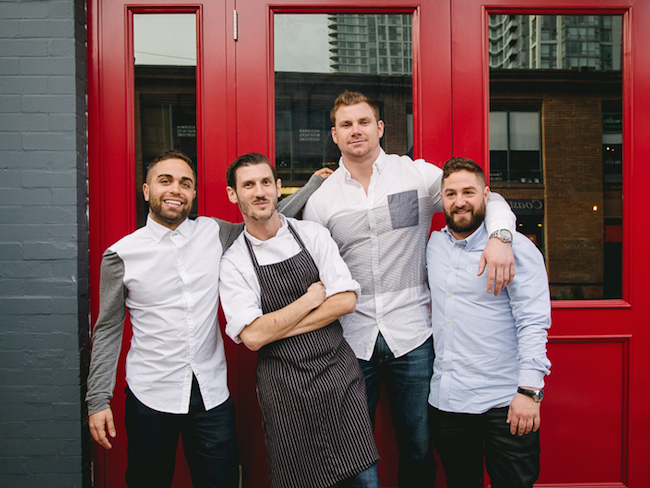 The team behind The Greek (Photo courtesy The Greek by Anatoli)

Instead of just the usual Greek salad, The Greek will have on their menu several kinds of lighter salad fare. Look for traditional dishes like a slow-braised Country Lamb, saganaki (pan-seared cheese), and calamari, along with bold modern strokes like in The Greek’s Rabbit Popsicles (rabbit loin wrapped in double smoked bacon and stuffed with house made lamb sausage).

Seeking the best quality ingredients is key for the team at The Greek, who will be getting their lamb from New Zealand, and their feta right from Greece. (We were assured “a cheese party in your mouth,” courtesy the imported feta, when we chatted with the chef and owners at the restaurant recently. Opa, indeed!)

The elegant but playful vibe of the shared plates menu extends to the bar, where The Greek will have a menu of exciting concoctions, including yogurt cocktails, and drinks employing molecular gastronomy (olive oil powder, Campari dustings), all showcasing Greek flavours found in the kitchen, like figs and honey, among others.

Brothers Alexi and Iani Makris (sons of Anatoli’s founding family, along with partner Daniel Bergman) are keen on introducing Vancouver to the rich heritage of Greek cooking but in a space and through dishes and drinks that fit the vibe of Yaletown. Creating that kind of communal atmosphere, without veering off into the more sterile or clichéd standard design territory of Greek restaurants, was crucial for the team.

Diners at The Greek will be able to relax, and toast to good times in a cozy, inviting space featuring a white-painted exposed brick wall, a custom mural, lanterns, accents of vibrant red, and the centrepiece bar. Additionally, The Greek has a terrific patio for warmer days and nights.

The Greek by Anatoli will open for dinner service on Friday, March 27, 2015.

The Greek by Anatoli