I had many questions about the sequel to the Vancouver made real-time strategy game, Company of Heroes. Where would it take place? How will they improve on a game that is already the most award winning game in its class? After 6 years of crafting their sequel, Relic Entertainment has released more official information.

In the original tactical strategy war game you maneuvered infantry squads and vehicles through vast historic battles starting with the invasion of Utah Beach and the Battle of Normandy.  In COH2 the battle takes place in the frozen tundra that was the Eastern Front as you take command of the Soviet Red Army and repel the Germans from Mother Russia. The goal of the developers was to create an authentic war experience and compelling story while improving upon the aspects that made the first game great. 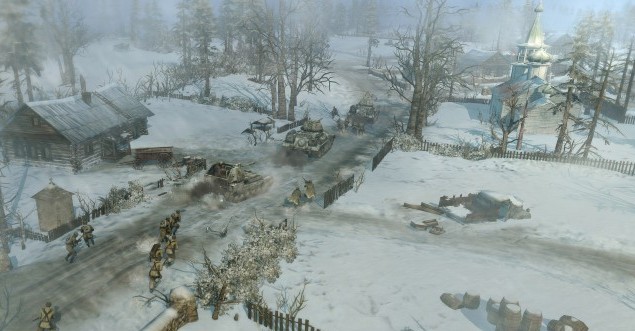 The game will look better than it did 6 years ago because of a new graphics engine. But, Relic has also taken smaller details, like the snowy backdrop, into more consideration than just for looks. While your squads march into battle through hip high snow they will move slower. Even the animations of each individual soldier will portray their struggle forward.  They’ve also built up upon the AI to make each squad feel more reactive and intelligent, as they will behave more aggressively or defensively based on their current situation. Squads will also be able to climb over walls where they were previously required you to go around it or blow a hole through it.

The greatest improvement that caught attention at E3 is Relic’s technology called True Sight. Unlike traditional Fog of War, like what we’ve seen in games like WarCraft and StarCraft, True Sight allows the players to see only what your soldiers are able to see in their line of sight on the battle field. The game will still feel the same but because of this fresh approach each battle will play out differently as you and your enemies can hide from each other before revealing your positions. The game received numerous nominations and awards from the media such as Best PC Game and Best Strategy Game.

Historically, the Eastern Front was one of the bloodiest battles in the Second World War. The Germans had superior technology in weapons and vehicles but the Russians had superior numbers and a merciless no turn back policy. The game itself has always been intense, challenging and gratifying. If you haven’t tried it, you can pick it up on Steam for the PC. In early 2013, I look forward to seeing what Relic Entertainment and THQ deliver and the surprises they have in store for us.