Howard has finally made up his mind

It seems as if finally Dwight Howard has made up his mind, and the Magic have finally gave in.  A four team trade has been completed and will be made official on Friday barring any setbacks from the league.   Philadelphia, Los Angeles Lakers, Denver, and Orlando are all a part of the deal that will send Howard to the West Coast.

According to sources, Andre Iguodala will be heading to Denver, while the 76ers will receive Andrew Bynum and Jason Richardson.  The Magic will get Arron Afflalo, Al Harrington, Nikola Vucevic, and one protected first round pick from each team that is a part of the deal, in addition to that, the Magic will receive other pieces including 76ers No. 1 draft pick Moe Harkless.

Although it finally seems like the Howard rumors can be finally put to rest, a trade call has been scheduled for Friday to secure the necessary NBA approval to make the deal official.

Here are tweets from ESPN.com’s Marc Stein who broke news of the deal. 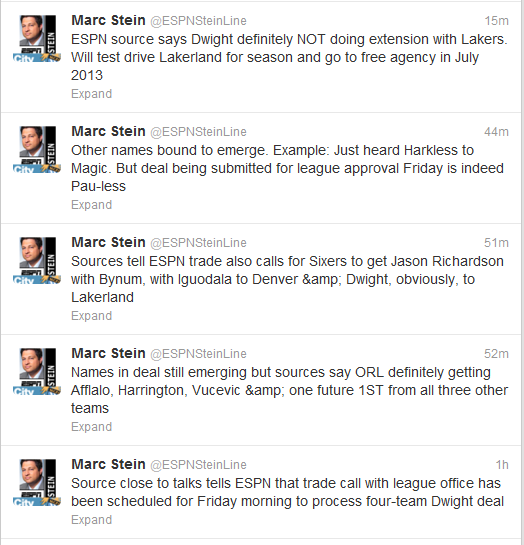 UPDATE: It appears that Orlando will also be receiving Christian Eyenga from LA in the deal.