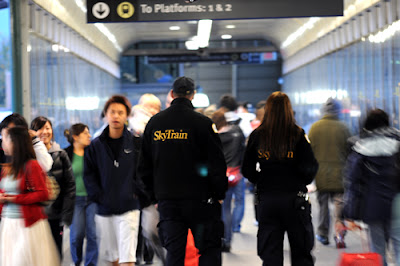 In 1983, a sky bridge was chosen instead of city planners’ recommended underground solution. This was done for cost reasons, but the bridge has become the legacy of Broadway Station ever since. Every transit rider who has experienced rush hour has seen the large amount of traffic passing through this key corridor. However, this pedestrian bridge is not necessarily the real element that creates the bottleneck. 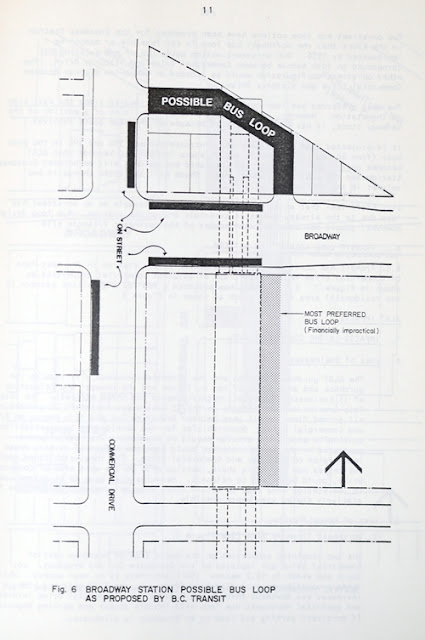 Above is an original diagram from the BC Transit impact report. You will notice a light gray area adjacent to today’s Platforms 3 and 4. This gray area was proposed as the most preferred location for a bus loop because it was removed from busy street traffic and was centralized to the core component of the station. However, it was determined to be financially impractical and was never pursed.

The long-term impact is already being noticed. Long line-ups for the 99 B-Line are seen up to Megabite pizza on busy days. Renovations are currently being made on the street to accommodate more buses. Every day that rapid transit grows, more people will be required to fit inside Broadway Station. Interestingly, the impact report also stated that the above-ground design would completely change the surrounding community and destabilize the neighbourhood by speculation. It also states a “potential mismatch of growth and level of services”. 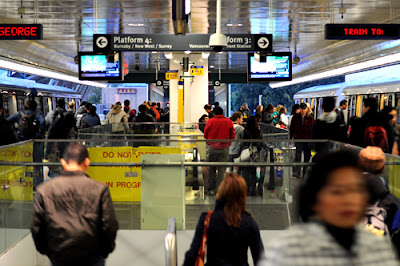 Premier Campbell has already envisioned a new Langley-Surrey SkyTrain and Surrey Mayor Diane Watts (FYI: the first appointed chairperson of the Mayors’ Council on Regional Transportation) is encouraging her citizens to attend Evergreen line meetings. By following the rules of city planning, we can estimate that a lot more traffic will be travelling from Langley and Surrey to commute downtown and to the UBC peninsula.

The UBC Line might solve the bottleneck issue. It eliminates the need for excessive bus traffic from Broadway station and foot traffic would be limited to transfers to Platforms 1 and 2 where SkyTrain will continue west along Broadway. But the UBC Line needs to be built first to alleviate the current crowding. This action would need tremendous support to shift the vision of SkyTrain construction.

Do you support building the UBC Line first? Let us know in the comments below or send a tweet to @VancityBuzz.