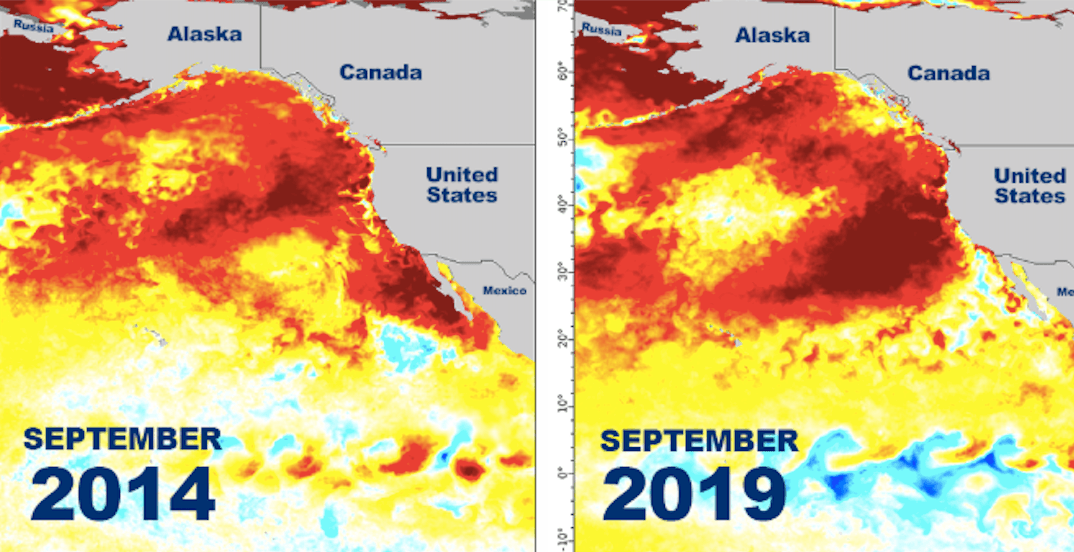 About five years ago “The Blob” of warm ocean water disrupted the West Coast marine ecosystem and depressed salmon returns.

Now, a new expanse of unusually warm water has quickly grown in much the same way, in the same area, to almost the same size.

According to the US National Oceanic and Atmospheric Administration (NOAA), the warm expanse building off the West Coast stretches roughly from Alaska south to California. It ranks as the second largest marine heatwave in terms of area in the northern Pacific Ocean in the last 40 years, after “The Blob.”

“It’s on a trajectory to be as strong as the prior event,” said Andrew Leising, a research scientist at NOAA. “Already, on its own, it is one of the most significant events that we’ve seen.”

Cold water welling up from ocean depths along the coast has so far held the warm expanse offshore, Leising noted. However, the upwelling, driven by coastal winds, usually wanes in the fall. The heatwave could then move onshore and affect coastal temperatures, he said. This already appears to have happened along the coast of Washington State.

The new heatwave resembles the early stages of “the Blob.” This previous marine heat wave peaked through 2014 and 2015 with temperatures close to seven degrees Fahrenheit above average.

Like “The Blob,” the new heatwave emerged over the past few months. A ridge of high pressure dampened the winds that otherwise mix and cool the ocean’s surface. The heatwave remains relatively new and is primarily affecting the upper layers of the ocean, it could break up rapidly.

“It looks bad, but it could also go away pretty quickly if the unusually persistent weather patterns that caused it change,” said Nate Mantua, a research scientist at the Southwest Fisheries Science Center.

A key question is whether the new heatwave will last long enough to affect the marine ecosystem. Biologists say that its large size means it probably already has. For example, warmer conditions during “The Blob” left lesser-quality food available to young salmon entering the ocean.  It also shifted predator distributions in ways that contributed to low returns of salmon.

This includes a band of high pressure stretching north to the Bering Sea and Alaska, “which have been unusually warm in recent years,” said Nick Bond, a research meteorologist with the Joint Institute for the study of the Atmosphere and Ocean in Seattle, a collaboration between NOAA and the University of Washington.

“There are definitely concerning implications for the ecosystem,” said Bond, who is credited with naming “the Blob.”

“It’s all a matter of how long it lasts and how deep it goes.”