It’s no secret that the downtown Vancouver Sears is closing its doors to make way for Nordstrom. In anticipation of Nordstrom’s arrival (which won’t be until late 2015 as the ugly white building itself will be renovated), The Hudson’s Bay company is going through a substantial $40 million renovation. This includes significant upgrades to the exterior and the interior. It will be Canada’s first fully renovated flagship store.

The renovation is all part of The Bay’s objective to become the No. 1 destination for fashion-conscious customers in Canada and they plan on doing so by adding a lot of high end retailers to their arsenal. They already have “The Room” and started with smaller Channel, Coach and TOPSHOP/TOPMAN boutiques inside. However, they have a lot more in store and in order for them to be successful they have to appeal to the 18-35 year old crowd that they neglected for far too long.

As we previously reported Vancouver’s first TopShop/TopMan will be located on the current men’s basement floor. At 33,000 square feet  it will be the largest international Topshop/Topman location. It is set to open in October of this year.

The biggest rumour out there that still has some legs is that The Bay is in discussions to bring a full Bloomingdale’s shop to take up a huge chunk of the 675,000 of space available. If that deal falls through, they will be looking at bringing in another retailer of equal or greater calibre.

A food store will be located in the sub-basement.

The largest menswear store in the city (The West End Shop)

The Men’s White Space’ will also be located on 6th floor at the Southern end of the men’s floor and will include designers: 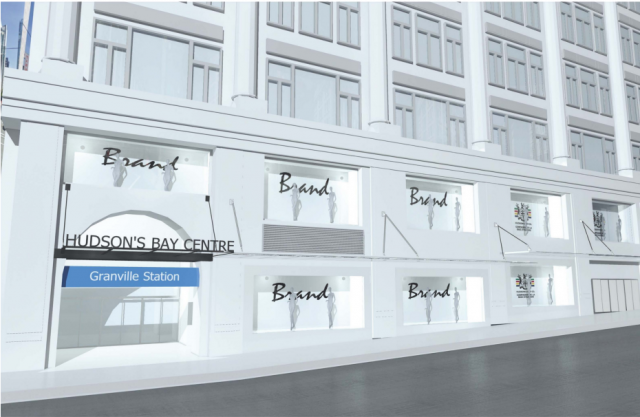 Upon completion of the 2012 renovation the new Hudson’s Bay Centre will have retail opportunities available of up to 65,000 sq.ft. (divisions are available). The location draws crowds of pedestrian traffic from the Granville Street Pedestrian Mall and is adjacent to the Pacific Centre & downtown public transportation hubs.