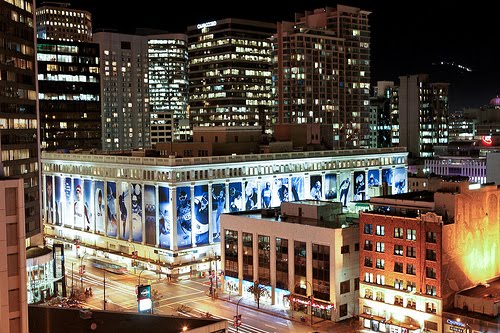 I know the City of Vancouver is a bunch of advertising Nazi’s, besides who needs the extra revenue when the city’s coffers are flush with cash, oh wait they aren’t… However, I digress, walking past the downtown Bay on Georgia Street the other day made me think how awesome the building looks adorned with the Olympic wrap. The only thing that needs work now is that hideous awning and they are working on restoring it.
I don’t know, perhaps I’m alone in liking this Olympic-ized version of The Bay, am I? Now if the City of Vancouver was to get real serious they would wrap up that giant toilet bowl Sears building in some crazy electronic billboards, on the Granville Street side of course and a nice mural or something on the other side. Oh how I hate that building! Such a prominent location gone to waste…

What do you guys think, better or worse?