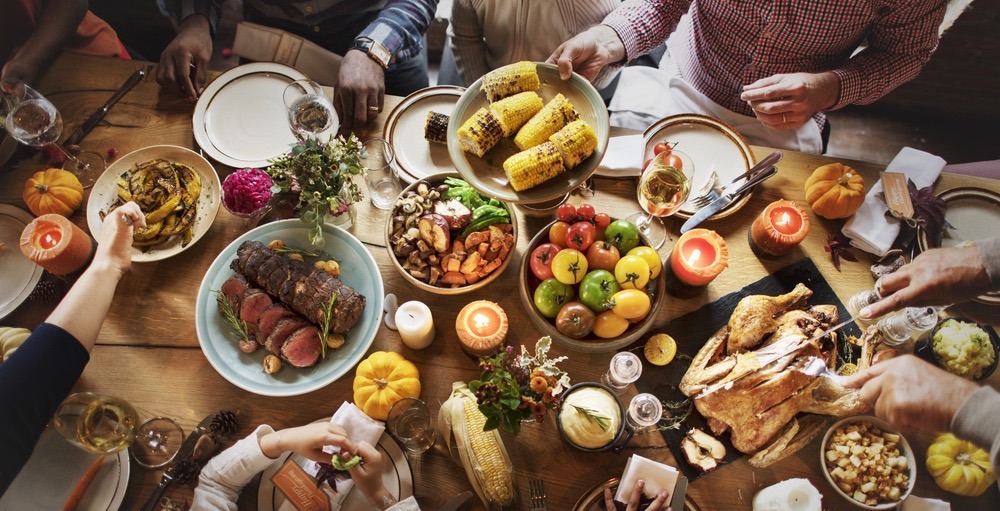 It’s the only statutory holiday between August and Christmas, there is absolutely no gift giving and there’s a delicious turkey to enjoy.

The underbelly of this annual feast? An undefined number of hours trapped in a room with your extended family and conversation that will inevitably turn to politics.

It all starts out innocently enough. Aunt Marie only wanted to know if business was booming. Your brother-in-law was just curious about the demographic of your neighbourhood. Grandma can’t be expected to keep up with what you can and can’t say nowadays…

Then suddenly voices are raised, accusations are passed around the table faster than the potatoes, and you’re lacing up your shoes because NO, YOU ARE NOT OVERREACTING and YES, you were always planning to leave right after the appetizers.

Deep breaths. Here are some conversation topics to get you through even the diciest moments this Thanksgiving.

Even when the sun’s not shining, weather truly has your back. For every awkward conversation with a cousin, there is the sweet sanctuary of a lighthearted remark about the unseasonal humidity. Watch out – Uncle Paul has that dangerous look in his eye. It could be indigestion, or he could be about to launch into a three-tiered objection to Bill C-51. Seize the opportunity to remind the table that fall is your favourite season.

Suggested smalltalk: “How about that September heatwave?”

Stay away from: Any talk of hurricanes or the Paris climate deal.

Orange, divisive and full of empty calories – that’s right, we’re talking about that most polarizing of seasonal beverages: Pumpkin Spiced Lattes. Aunt Alison is totes basic. She likes to sip PSLs whilst wearing UGG’s and leggings, and wouldn’t mind trying out Pumpkin Spice Latte deodorant (because yes, that’s a real thing). Your sister’s fiancé, on the other hand, thinks it’s the devil’s work and wishes everyone would STFU about it. In short, all the heat and intensity of politics without cutting family ties forever.

Stay away from: Generalized Starbucks chat, corporate greed or suggestions that Pumpkin Spiced Lattes are a metaphor for the decline of the Western world.

Baseball. Golf. Hockey. Archery. There really is a sport for everyone. And with just a few choice words and phrases, you’ll be able to safely navigate your way through a conversation you know nothing about. Try checking out ESPN ahead of time for handy soundbites you can regurgitate when conversation moves onto shaky ground. And if you really don’t do sports, reminding your relatives how adorable that popcorn-pinching toddler was at the Invictus Games might take you up to dinner time.

Stay away from: Football players kneeling during the national anthem. The gender pay gap.

Oh, turkey. Innocent, harmless turkey. Your mother’s turkey doesn’t have a propensity to tweet first thing in the morning. And you can trust that 30 pound butterball of yumminess not to lead you into nuclear war. A simple licking of the lips and a casual ‘Mmmm, even better than last year!” can swiftly move conversation that is veering headlong towards immigration back to safer pastures.

Suggested smalltalk: “You MUST give me the recipe for that cranberry sauce!”

Hey girl. If all else fails, you can count on Canada’s national treasure to get you out of trouble. Ryan Gosling is loved universally by men, women, uncles and Grandmothers. Talented without an ego, handsome but self-deprecating – London, Ontario’s finest export has enough fodder to get you back on track faster than your Stepmom can say ‘gender-neutral bathrooms’. Not a fan of The Notebook? Can we interest you in a 1992 home video of his dancing?  Plus, let’s face it – the man is just a few tear-jerking acceptance speeches away from achieving sainthood.

Stay Away From: Canada’s other celebrity.