West Vancouver police are warning children and their parents to “carefully review” whether the possession of air guns is safe, after four masked teens were brought into police custody Thursday for firing pellet pistols in public.

The incident happened in West Vancouver at the 900 block of Cross Creek Road Thursday afternoon when four masked teens were seen hiding in a wooded area shooting pellet guns at passing vehicles and pedestrians.

West Van Police their Youth Liason immediately located the boys, ages 14 and 15, and brought them into custody without incident.

According to a police report, the air-powered guns, virtually indistinguishable from real firearms, were seized along with ammunition and other accessories. The toy weapons were not marked in any way to differentiate them from real guns. 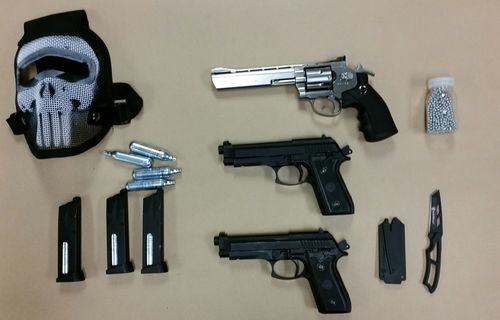 The three boys, from West Vancouver and North Vancouver, were later released to their parents by police.

Police are not recommending charges, but are discussing an extrajudicial resolution through North Shore Restorative Justice.

The incident is a reminder to parents to review whether or not their child should be in possession of an air gun of any kind and to prohibit the use of such weapons in public. Anyone seen carrying an imitation gun or a toy that gives the perception that the item is a real weapon is at risk of a police response that could include lethal force.