Ok, so this is a bit of a random article today. But perhaps you’re like me and have always wondered who that guy is at all the Team Canada hockey games? You know the guy. He was at seemingly every hockey game at the Olympics in 2010 (I saw him at a curling match too). He was also the guy that provided the giant flag for the gold medal winning team to wave on the ice after Crosby’s golden goal. Since then, I have seen him periodically at big events, and even a couple of Canucks games. 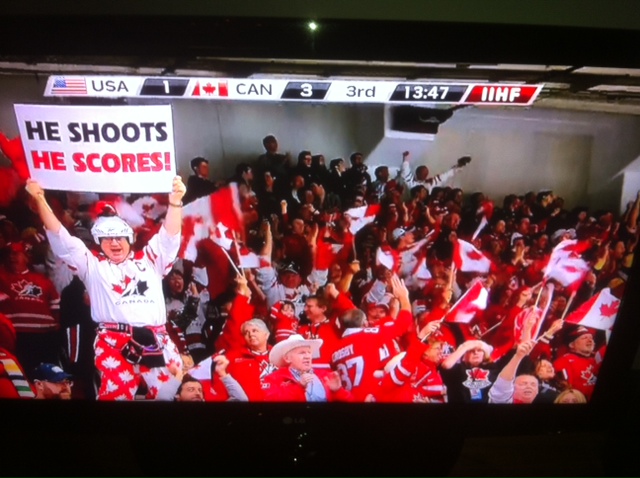 He is the guy with the “He Shoots He Scores” and “Hockey is Canada’s Game” signs with the red light on his head. Call him a superfan, call him a patriot, call him Canada’s biggest attention seeker (seriously, he is always located near the cameras and appears to go looking for them when a goal is scored). In any case, he’s back!

That’s right, you can see him at every Team Canada game in Malmo, Sweden at the World Juniors lately. His name is Dave Ash, and he’s from Saskatchewan. He spent a few years as “Gainer the Gopher” and is a big Roughriders fan. He even has his own Facebook fan page (started in 2010 by the looks of things) called “Guy At All Of The Team Canada Games With The White Helmet And Red Light.” He also runs a tour company called Dash Tours, which is part of the reason he gets to all of these different events.

And now you know!

You can watch Canada (and Dave presumably) take on Finland in the World Junior semi-finals Saturday morning (10 a.m. on TSN).