Calling all lonely Starbucks lovers!  pop music’s biggest star, Taylor Swift, stops in Vancouver on August 1 with her 1989 World Tour. It’s been a phenomenal 12 months for the singer – 1989 is the year’s best selling album by far and has generated three number one singles (so far).

As indicated by our setlist preview, Swift has an epic night in store for her fans and may have one or two tricks up her sleeve for Vancouver – she’s performed surprise duets with The Weeknd, Nick Jonas and Rachel Platten during other tour stops.

But before the diva takes over BC Place this weekend, we’ve crunched Taylor’s numbers and came up with some pretty interesting stuff. Nothing important – just random trivia to impress your friends and annoy your co-workers with.

When asked by the Wall Street Journal to assess the current crop of pop divas, Franklin called Adele “a good singer” and said Alicia Keys is “a good writer.” But when asked her opinion on Taylor Swift, the Queen of Soul (& Shade) had nothing more to say than “Ok, great gowns. Beautiful gowns.”

5 – number of phrases from 1989 trademarked by Taylor Swift

According to legal database Justia, the deal forbids the phrases “Party like it’s 1989,” “This Sick Beat,” “Cause We Never Go out of Style,” “Nice To Meet You, Where You Been?” and “Could Show You Incredible Things” from being printed on items like tattoo transfers, disposable dinnerware, wind chimes and trash liners without a license.

17 – total cost, in Canadian dollars, of a Taylor Swift prayer candle on Etsy

Swift’s legal team cracked down on the site earlier this year for selling unauthorized merchandise of the star, but to no avail. There are currently more than 1,000 items on the site bearing Swift’s name or likeness including iPhone cases, acrylic nails and one really awesome “Shake It Off” kraft paper banner (that I may or may not have two of).

According to setlist.fm, the song most likely to make a Taylor Swift setlist is “Love Story,” followed by “Our Song” (388 career plays) and “You Belong With Me” (354). Expect those statistics to change once the 1989 World Tour is over – “You Belong With Me” has only been performed twice so far, and “Our Song” has yet to make the cut.

After the singer called them out for not compensating musicians during a three-month trial of the streaming service, Apple’s vice president quickly amended the payment structure for artists. Swift was impressed – four days later, she announced her decision to let Apple Music stream her 1989 album.

The  pop superstar earned an estimated $80 million in 2014. Former BFF Katy Perry is number 3 on the list with $135 million while alleged former BF Ed Sheeran comes in at number 27.

Ironically, the building was originally a sausage factory but underwent an overhaul before Swift moved in. And just when you thought she couldn’t get any more “normal” or whatever, she confessed to Rolling Stone that she converted the apartment’s walk-in closet into a “greeting-card writing room!”

22 – total number of Grammy nominations earned by the star

Ironically, her monster hit “22” failed to earn any Grammy love at the 2014 ceremony. Swift has won a total of seven Grammys including Album of the Year for Fearless.

70 – percentage of guys that ask Swift out via “random e-mail,” according to her

The singer’s love life has been carefully monitored by the press in the last couple of years, but she insists she’s not really into anybody these days. “I feel like watching my dating life has become a bit of a nation pastime,” Swift told Rolling Stone. “And I’m just not comfortable providing that kind of entertainment anymore.”

For years, Swift was plagued by rumours that she was born without a belly button. She addressed the controversy last year saying “I don’t want people to know if I have one or not. I want that to be a mystery.” The singer finally let the cat out of the bag in February when she posted a bikini shot on Instagram in an effort to scoop paparazzi who had invaded her Maui vacation.

There, now don’t you feel a little smarter? A handful of tickets for the 1989 World Tour are available here. 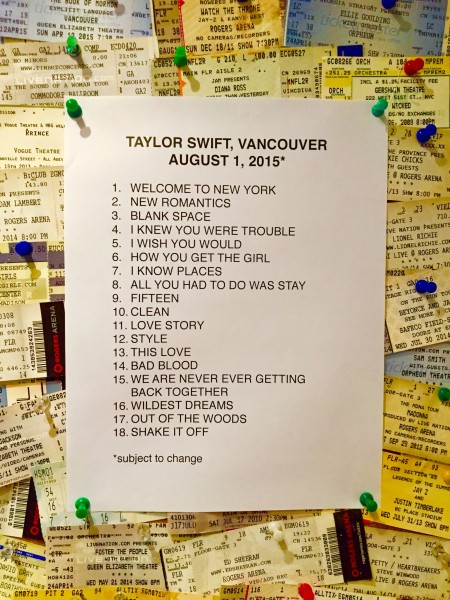