Today marks “Tax Freedom Day,” according to the Fraser Institute.

It’s a day the institute calculates every year to determine how much Canadians are really paying in taxes – according to them, 43.7 percent of the average family’s income goes towards taxes, which is how much you earn from January 1 to June 10. 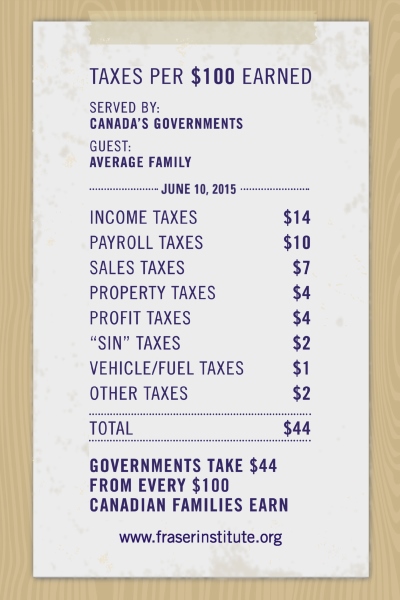 “Without our Tax Freedom Day calculations, it’s nearly impossible for Canadian families to know all the taxes they pay each year because federal, provincial and local governments levy such a wide range of taxes,” says Charles Lammam, director of fiscal studies at the Fraser Institute and co-author of the yearly study, in a press release.

“Governments across Canada are partly to blame for the increased tax burden because many have raised taxes again this year,” Lammam says.

This is a national average taken across all provinces. B.C. does a little better than many other provinces, with a “Tax Freedom Day” of June 6, which is the same as last year.

This infographic breaks down each province’s “Tax Freedom Day” and shows what percentage of your income goes to each tax.

Here’s a list of each province’s “Tax Freedom Day” from earliest to latest: