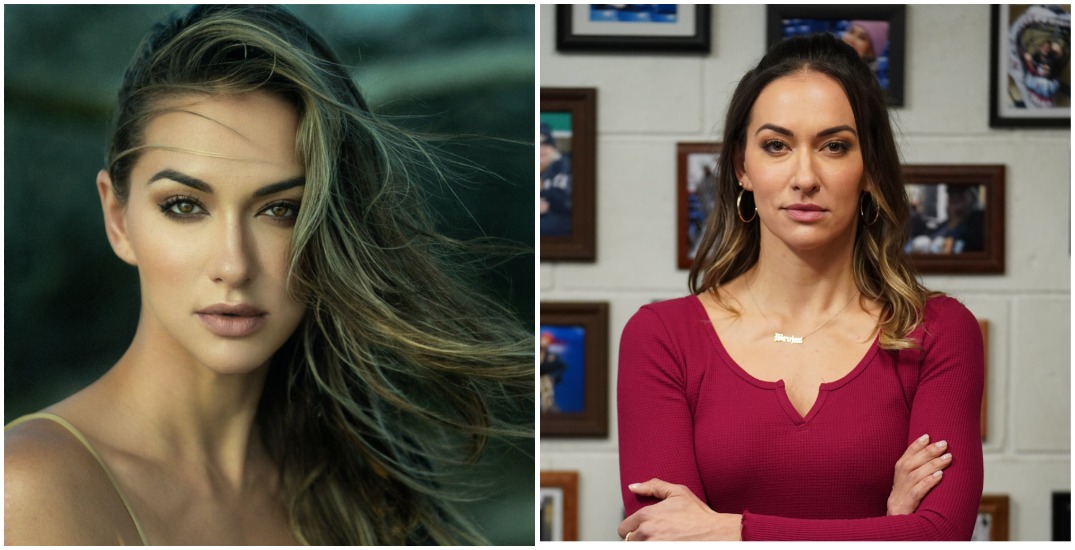 Calling all fans of hit show Letterkenny — the highly anticipated spinoff series Shoresy will be streaming coast to coast tomorrow on Crave. Created by Jared Keeso, the six-episode comedy show follows foul-mouthed fan favourite Shoresy (Keeso) as he joins the Sudbury Bulldogs of Northern Ontario. The team is on a quest to never lose again, and cheering them on is manager Nat, played by Tasya Teles.

Ahead of the release, I caught up with Tasya to talk about her journey into acting and what we can expect from the show.

The Toronto-born actress, best known for playing Echo on CW’s The 100, moved to Vancouver at age five, and growing up, she split her time between the Dunbar and Kitsilano neighbourhoods. It was here she developed her passion for acting, encouraged by her parents, who enrolled her in classes at the local community center.

Unlike many actors who start working in the profession as kids, Teles actually finished high school and headed east to pursue a future in finance.

“My whole journey is that I went to Montreal and did a finance degree. I graduated, then the stock market crashed. I thought, well, I don’t really want to do finance anyway. It was kind of a now or never situation.” She gave herself three years to make it in the entertainment industry. “I did everything in my power to make it happen.” Teles came back to Vancouver, “and that’s where it all began.”

Looking back on her debut role almost 10 years ago, Tasya has noticed a shift in how she approaches her jobs. Starting out, she would “stay up all night long. I made acting my number one priority, and I was kind of ruthlessly pursuing it with a huge amount of discipline and not a lot of time for social activities.” These days, she feels she makes more conscious decisions about the direction she wants to go in. “Before, I was just trying to get into the industry, and now I’m being more specific.”

She’s also seen significant changes with being a female in the industry. “One of my first in-room auditions [I did], they made me audition in a bikini, and I thought that was wild. I think there’s a lot more protection for women now than before. It’s a joy to be a female working in this space right now during all these changes.”

When thinking about some of the craziest things she’s had to do to prepare for a role, one memory sticks out for Teles, and it happened at a bar in Vancouver’s Downtown Eastside neighbourhood. “My scene partner and I dressed up as our characters and pretended to have our first date at this really sketchy bar at Main & Hastings.”

Her laughter is infectious as she continues, “His character had a black eye and wrapped knuckles from a fight, and I had mascara running, and my hair was all messed up. People started looking at us, and I was like, we need to go.” Not the wildest of her tales, but for sure one of the most memorable.

Acclaimed acting coach Larry Moss, known for training Leonardo DiCaprio and Margot Robbie, is someone Tasya has looked up to throughout her decade-long career. “I train with him as frequently as possible because he is such a masterful teacher. He has definitely impacted my journey the greatest.” She’s also inspired by Cate Blanchett, “one of the most impressive actresses out there with so much grace.”

When talking about the new show, Shoresy, Tasya can barely contain her excitement. “I was really nervous for a bit because it’s such a different tone to what I’m used to. Jared [Keeso] and Jacob [Tierney] are so good at what they do, and they have such a well-oiled machine. With all their experience from Letterkenny, they made it really easy for us. I saw a few episodes, and they are awesome. It’s great to be in comedy.”

A new genre for Teles, who is coming from a background of drama and sci-fi, she tells me that she prepared for the role by working with her acting coach and studying hockey. “I also watched Letterkenny quite a bit and tried to figure out some of Nat’s heroes, the type of person that she wants to be, and the energy she carries.”

Speaking more about her character, she says, “Nat wants the team to win. She wants people and families to come to the game and to cheer for the team. So, when the boys start losing, she’s not happy because she feels that sports and hockey bring people together. They bring communities together, and her whole thing is, do you know how hard it is to cheer for a hockey team that can’t win a game?”

Then she’s also facing Shoresy, “a badass on the ice,” and her main job becomes trying to keep the boys in line. “That’s where a lot of the comedy plays out,” she adds.

If you enjoy Tasya’s on-screen appearances, you can expect a lot more to come, “I’m going to be leaning into comedy more. Shoresy really whets my appetite for it, and [I] really want to be a part of that world.”