UPDATE: 10:20PM – Firefighters are sitting in the transit bus still waiting for the roof to burn out. Old buildings hold a lot of oxygen in their roofs so they have no choice but to wait it out.

UPDATE: 9:35PM – Nobody was hurt. Fire crews were able to evacuate premises of neighbouring units (including the print shop). Fire crews are trying to cave the building in to avoid spread of fire.

Tandoori King restaurant on Fraser Street and 64th, the one next to the old billiards place (not sure if it’s still there) on the 64th side (not the Original Tandoori King on Fraser), was destroyed by a massive fire this evening. At press time crews are still battling the blaze. No word of the cause and if anyone was hurt in the blaze. Let’s hope nobody was hurt.

A South East Vancouver institution has been destroyed and the city, which has so few good Indian restaurants, was a local favourite. 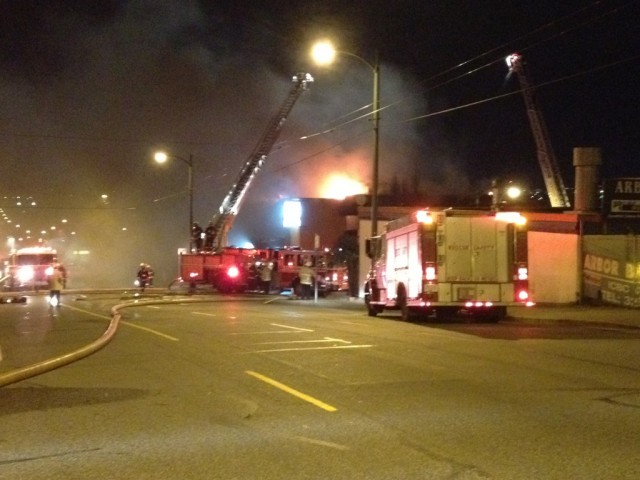