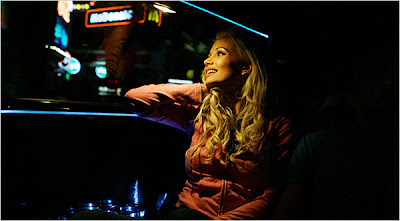 My night started out on the Fortes patio for a co-worker and now good friend, Cleo’s, goodbye party. She was moving on to greener pastures and what better way to celebrate than with the clink of a wine glass on a patio, with hot rich men in suits picking up the tab?
We had made reso’s for five, skipped out early on work on a nice hot summer day and nestled up to what I think is one of the nicest bar stools in Vancouver. Half an hour later our intimate party of five had grown to twenty (I blame the crackberry) and I had Frenchie screaming at me in French as he was now way over capacity. Two glasses of wine in, I smiled at him and politely told him to chill out, in french. Yes, I was in a devilish mood and quite frankly it wasn’t my job to stop people from coming up, didn’t he run this place? He gave me an exasperated look and left. Ok, I admit it was a bit of a Yaletown princess move. It also was not my fault that everyone was coming to Fortes and buying bottles of Dom at 4:00 in the afternoon. Or was it?
Tired of being surrounded by my coworkers and old British men, a few of us branched out to Goldfish for dinner. By a few of us, I mean two of my best girlfriends and a certain dapper Mr. Brown. Mr. Brown is a man of mystery – I’m not quite sure what he does and I’m not going to find out. All I know is he has lots of green, is a lot of fun, is very classy and knows everyone in this city. Perhaps family money?
The four of us were enjoying the small patio in the back and another delicious bottle of wine when Mr. Brown noticed a friend inside. He went over and came back with a ‘Slick’. Yes, this man had on tight jeans, a dress shirt half buttoned up, was way too tanned and his hair was long and shaggy. I admit… I was intrigued.
The five of us were on fire – drinks were flowing, conversation was great, the night was beautiful. My girlfriend J, known for breaking out into an impromptu dance party, dragged me and Cleo out for a breath of fresh air (well, in her case, a smoke). In front of Goldfish we noticed a black Lamborghini. Totally not my type of ride but I have to admit I’m attracted to anything black. Mr. Slick came out to join us and, of course, opened the car door and told us to jump in. Hmm… ok.
We hopped in his car and I asked for the keys. I was envisioning myself tearing off with night vision goggles down the street at neck breaking speeds, when I realized I probably was in no shape to drive. My mind went from speed to sex (obviously) and I asked him if he’d ever ”christened” his car. Honest question… not so sure if I got an honest answer.
Slick helped us out of the car and we wandered down to Glowbal… of course. This is where the night went from good to great. Jo broke out her signature dance party in the center of Glowbal with Mr. S. It was gold. People were staring like the two were aliens; so I, of course, joined in and pulled over Mr. Brown and Cleo. GT’s were happening.
A few more cocktails and what I call “fun talk with randoms”, and we left for Bar None. As we were walking out, Mr. S looked around and mumbled to me, “I wonder where my bodyguards are at”. Was he for real? He told me he always has two guys on him at all times. Now although I was having a good time, this little fact definitely sobered me up for a second… was I in any danger? And then, always trying to find the positives in life, I wondered, were his bodyguards hot?
We arrived at Bar None and were ushered right into the VIP. If I were in LA, London, New York or Paris I would be impressed, but Bar None is by far my least favorite place to be. Maybe if they redecorated?
We partied like rock stars that night – dancing and laughing, and from what I remember, enjoying a great connection with good friends and new interesting people. And no, I didn’t christen the Lambo. No matter how black it was, I’m still not a fan of the “old man, too unbuttoned shirt” look. Plus, the bodyguards weren’t hot.
My Lessons from a Bar Stool:
Lessons for the Ladies:
1. Mature and classy men don’t expect you, or pressure you, to put out after picking up the tab.
2. Initiate dance parties whenever the mood hits.
3. Don’t sleep with a man because of the car he drives, no matter how black it is.
Lessons for the Men:
1. Do up your shirt, don’t risk looking like a douchbag. Two buttons undone max is the rule.
2. If you don’t feel safe without bodyguards, perhaps reconsider what’s going on in your life?
3. Always pick up the tab, it’s just classy.
VancityBuzz.com
ADVERTISEMENT
ADVERTISEMENT
ADVERTISEMENT