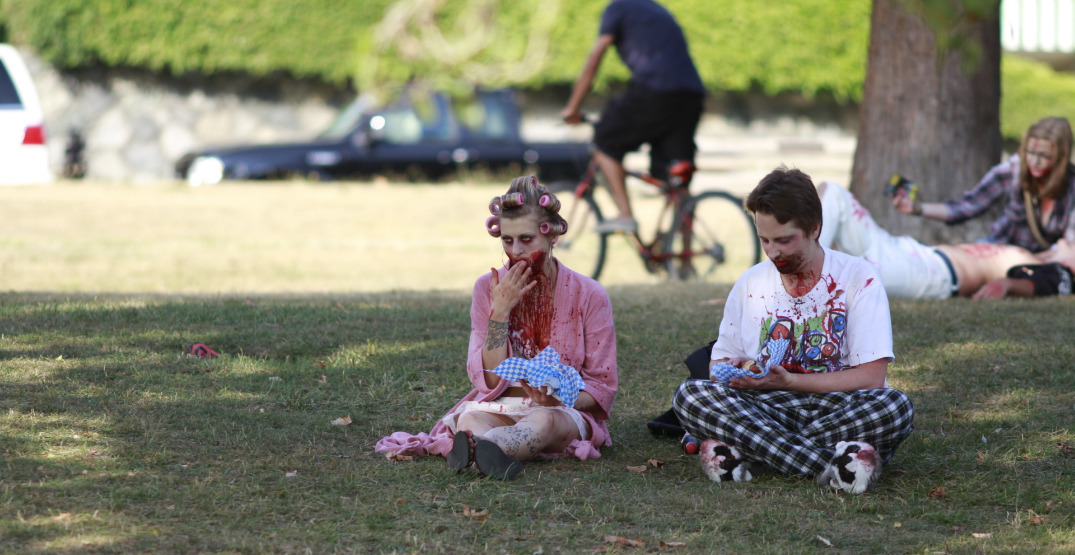 Have you ever wondered how you’d survive a zombie apocalypse in British Columbia? So have we.

Halloween is nigh, which means the ghouls, the freaks and, yes, the zombies are getting ready to come out in BC.

Do you have a zombie apocalypse preparedness kit? No? Well, you’ll need a place to run off and hide then. But, you’d also need resources to get you through it.

Thankfully, we’ve devised a list of the best places to go when the zombie apocalypse finally arrives in the province.

Before we highlight the best places to survive the zombie apocalypse in the province, did you know that the BC government actually has an official zombie preparedness portal on their website? It’s true!

They have some quick tips, including making sure you have a full tank of gas, an emergency kit, a plan, and an out-of-province contact.

I guess if you drive an electric car, you’re screwed.

Vancouver and the Lower Mainland

If you’re planning on hunkering down in Vancouver, you’re probably not going to fare very well.

Double whammy if you’re driving an electric car in Vancouver.

Vancouver is a major population centre, and the city’s density does it no favours.

A post shared by The Fraser Valley, BC 🇨🇦 (@thefraservalley)

While Vancouver proper would likely become a zombie hotbed, parts of the Fraser Valley may actually be great spots to survive.

More remote areas of the Fraser Valley, like Aldergrove, Hope, Harrison, and the Sunshine Valley, could prove to be excellent places to hunker down.

Yale, not Yaletown, is a tiny town located in the Fraser Valley.

Yale is “the wickedest little settlement in British Columbia,” according to the historic Yale website.

Formerly a BC gold rush town, Yale has a population under 200 people.

Again, low populations are one of the keys when looking for a place to survive, so this would make a great spot to create an anti-zombie fort.

Higher ground is essential when the zombies are coming. Whether the zombie apocalypse features the common slow zombies or the fast, jumpy kind like you see in 28 Days Later, higher ground will automatically provide you with a layer of protection. It also gives you a good vantage point of what’s happening down below.

Bonus points if you’re ascending to a point that requires you to traverse treacherous terrain that the zombies may not be able to navigate.

Another reason the mountains will be a good place to go is the fact that most are scarcely populated.

Whether it’s Grouse, Cypress, Mount Seymour, or the lesser-known mountains in BC, they’ll all give you the upper hand, pun intended.

While most mountainous regions in Vancouver aren’t huge residential population centres, Sharktooth Mountain takes that to the extreme.

Located between the Cassiar and Dall Rivers, Sharktooth Mountain is 11 hours out from Vancouver, so if you have the gas for it, you’ll find almost no signs of life up here.

It was named based on the profile of its peak.

Tahsis is a tiny remote village on Vancouver Island.

It has fewer than 400 residents.

The zombie infection will likely not spread to Tahsis, at least not too quickly.

While Squamish isn’t the most remote location in BC, several geographical features make Squamish a good place to go.

For starters, it has many mountainous regions and long sprawling areas where there is little to no human activity.

Resources will also likely be plentiful in the surrounding wilderness.

Naramata is ideal for multiple reasons. Like Tahsis, it’s remote with a tiny population.

But it’s also in the Okanagan Valley, which means resources, including food, will be plentiful.

Vancouver Island is a complicated place to talk about when it comes to the zombie apocalypse.

If the apocalypse starts off the island in mainland BC, the island, and places like Tahsis mentioned above, would make a great escape destination.

However, if the apocalypse breaks out on the island with you on it, that is likely how your story ends.

If there was one area of Vancouver Island where you could almost be sure to be safe, it’s Zeballos, a town you likely haven’t heard of.

According to the 2011 census, Zeballos only had a population of 125, which is actually lower than their 2006 census.

One point of interest to note is that the Zombie Research Society actually called Canada the second best place in the world to survive a zombie apocalypse.

Which means our American neighbours from the south will likely be flocking north.

In essence, stay away from the border.