This weekend, any number of airplanes will land on the tarmac at Kansas City International Airport, with many of them flying in the fans and stars of Invicta Fighting Championships 2, set to take place this Saturday night.  The mixed martial arts promotion is quickly working toward becoming the preeminent stage for women’s MMA, providing a healthy stage for all experience levels to make their names known.

Once such arrival is Surrey’s Cheryl Chan, who makes her professional debut against Jocelyn Lybarger.  The 33-year-old Chan has made a fast transition from the amateur ranks to a professional career, amassing a 6-2 record in less than 24 months.  Chan’s corner of her training gym (Mendoza Mixed Martial Arts in Surrey) is draped in her accomplishments and titles.  Shining title belts glint from their perches, a testament to Chan’s six wins by submission enroute to the big leagues of MMA.

The popular Lybarger is arguably the “name” coming into the fight.  She is one half of the first set of twins in women’s Mixed Martial Arts, and her family is well known around her hometown Las Vegas, including her future sister-in-law who is an accomplished DJ and will be tending to musical duties on Saturday night.  Despite perhaps being the lesser known fighter coming in, Chan’s focus remains undeterred, and on the fight itself.

During a recent discussion with JP Lasaleta of Vancouver-based MMA website MMASucka, Chan discussed her ambition to turn pro, starting with a tongue-in-cheek race against time.

“Well I wasn’t getting any younger.  If I wanted to do it, the time to this is now.  I’ve had a few fights under my belt, and I’m feeling more confident and more comfortable.  Still learning every day, but I thought I was ready”

Prior to Chan’s introduction to Mendoza MMA in Surrey, she admitted that she had no previous martial arts background.

“I played sports all my life.  I was never into martial arts.  I believe when I was 8, I took 2 karate classes, but my mom took me out after I started practicing the moves on her.

Chan’s current plans are to fight at, and stay at women’s Flyweight (125 pounds) for the duration of her career, though she hasn’t discounted the possibility of a different weight class as her professional career progresses.  While Invicta showcases all weight classes, other major North American promotions choose to target in on certain ones, which could prove challenging since none really promote Flyweight over others.  US based Bellator Fighting Championships has showcased the Super Flyweight/Strawweight (115 pound) division, though they may be hosting a Flyweight tournament in 2013.  Strikeforce actively promotes the Bantamweights (135) more than any other division, and have never held a fight at a weight lower than that.  Still, it wasn’t the variance of weight class showcases that draw Chan to Invicta.

“I heard about the first show, and I heard about the main event and what they were trying to do with Invicta — in taking all these ladies and putting them all into one show.  I like what they’re doing, and I like where they’re bringing women’s MMA”

Chan closed by crediting her training partners, and thanking her fans for helping bring her this far.

“If I wasn’t here at Mendoza, I wouldn’t be where I am today.  We train as a family, and I’m comfortable here.  Everybody works hard, everybody trains together.  There’s no egos here.  I appreciate all the fan love and support too.  It’s surreal and I’m trying to let it all sink in, but I’m ready to put on a show and I appreciate everybody supporting me”

Cheryl Chan debuts as a professional mixed martial artist this Saturday at Invicta Fighting Championships 2.  The event begins at 4 PM, and can be watched live and free of charge at InvictaFC.com.  Chan’s fight against Jocelyn Lybarger is scheduled to be the second fight of the card.  Fellow Vancouverite Julia Budd will fight later in the night, as will fellow British Columbian Sarah Moras.

Invicta Fighting Championships does create fighter-specific posters prior to every event to showcase and promote each participant.  Below is what Chan’s looks like.  You can follow Cheryl Chan on Twitter and offer your support @CherylChanMMA 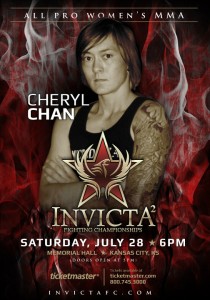