Surrey’s Sikh population will be celebrating at this year’s Vaisakhi Parade at Gurdwara Dashmesh Darbar Temple on April 22 – and everyone is invited!

Hundreds of thousands of people are expected to turn out for this year’s colourful Vaisakhi Parade, which attracted a record-breaking 350,000 people last year.

“This week, Sikhs in Canada and around the world will celebrate Vaisakhi, a festival that marks the most important date in the Sikh faith,” he said in a statement.

“This year, as we mark the 150th anniversary of Confederation, let us take the opportunity to honour the many cultures, traditions, and beliefs that make Canada such a wonderful place to live. Canada is proud to be home to one of the largest Sikh populations in the world. Sikh Canadians help make Canada the strong and diverse country it is today.”

“On behalf of all Canadians, Sophie and I wish everyone celebrating a joyful Vaisakhi.”

Alternatively known as the Surrey Khalsa Day Parade, the festivities also mark the anniversary of one of Sikhism’s most important events, the creation of the Khalsa in 1699.

Khalsa – meaning pure – refers to the baptism ceremony all Sikhs are expected to go through as part of their own personal spiritual evolution.

This year’s Vaisakhi Parade starts Gurdwara Dashmesh Darbar Temple at 9 am. Take a look at the map below for this year’s parade route. 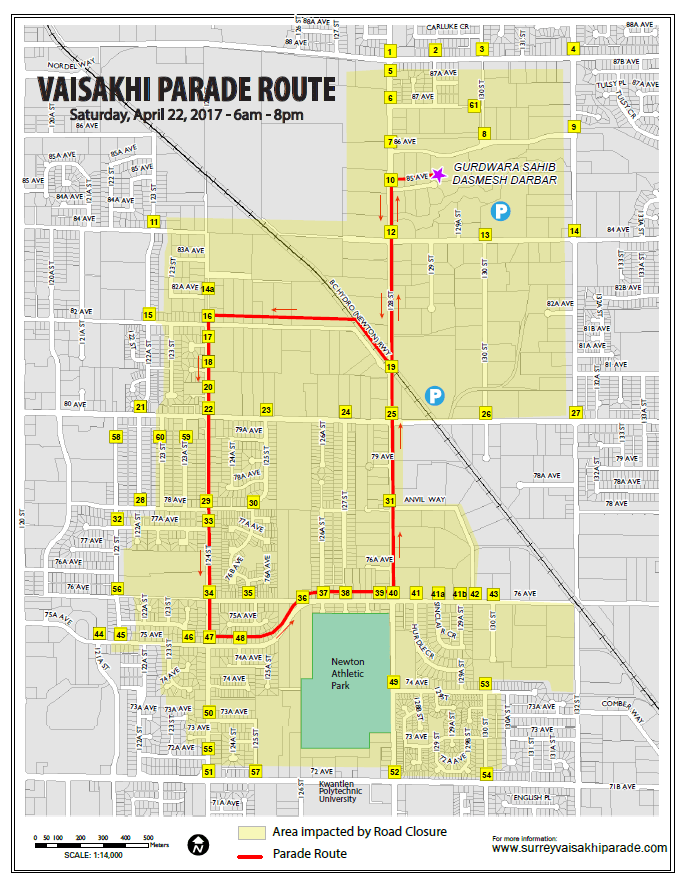