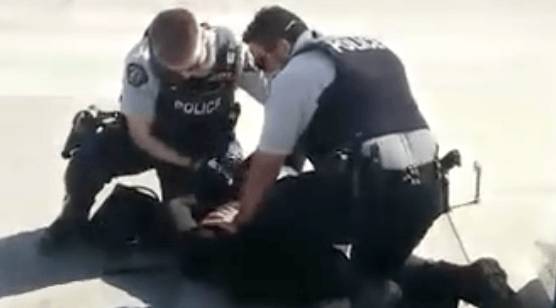 The father of a girl, who was physically restrained by Surrey RCMP officers as she lay crying in the street, is calling for an apology, as an investigation into the incident drags on.

The two officers were caught on camera restraining the 16-year-old girl on April 28, in what the police deemed a “case of mistaken identity.”

At the time, Surrey RCMP said they were investigating the incident and that officers had met with the girl’s father Garry Auguste and the rest of her family.

However, more than three months later, Auguste has told Daily Hive the RCMP is “taking their sweet time” to respond to his family’s request for an apology.

“We have been very patient, and were hoping that they would have come forward and shown some respect to our daughter and the rest of us who were choked by what happened.”

RCMP has an ‘abusive stance’

Auguste launched a formal complaint against the Surrey detachment for their handling of the incident.

In the immediate aftermath, Surrey RCMP said senior investigators had met with the girl’s family and continued to be in contact with them.

Three months on, Auguste says officers were constantly in touch with him to begin with, but now he only gets generic correspondence once a month, saying they are investigating.

“I am aware they need to get to the bottom of their abusive stance,” Auguste told Daily Hive on Friday.

“The way they conducted themselves makes me wonder if they really care about their mission to serve and protect.

“I feel the police’s behaviour is so militarized they think they are above the law when dealing with the community.”

‘It all happened so quick’

Speaking to Daily Hive back in May, Auguste said the incident occurred when his daughter was waiting at Newton bus loop.

Auguste said his daughter told him she noticed an officer making his way towards her and “stepped aside” so as not to be in his way.

However, her father said, the officer continued to approach her and told her he needed to take her to the mental institute, addressing her as Latoya, and saying he had a warrant.

In response, he said, his daughter told the officer they had the wrong person, “but the officers continued to insist that she was their person.”

At this point, Auguste said, his daughter was scared, so she stepped back and as she did, one of the officers grabbed her.

At the same time, a passerby took a photo of the situation and began filming as well. The video was later posted on Facebook.

“It all happened so quick,” said Auguste at the time. “There was no mention of, ‘What’s your name?’ or ‘Give me your ID.’

“They just assumed they got the person they were looking for and took her down.”

As the video shows, his daughter screamed and cried in the street, with the two officers restraining her, until she finally convinced them to look at her ID in her bag.

At that point, said Auguste, they realized they had the wrong person, and let her go.

Auguste said the family took the girl to the police station, hoping to open a complaint, but police tried to question her, telling her father he didn’t need to be there.

“The officer told her, ‘Don’t worry, I’m not going to charge you with anything,’” he said. “My daughter said, ‘Charge me with what? I’ve done nothing.’”

At that point, Auguste said, he was offered the explanation that officers had been looking for someone who matched the exact description of his daughter.

He said he asked to see a picture of the person police were after, but they were unable to produce one.

Auguste said the whole incident had a hugely negative impact on his daughter, who had been excited to start a new job.

When he picked her up after the ordeal, he said, “she looked really, really down. Her clothes were messy, her face was tired.”

He and his wife later took their daughter to get checked at the hospital, he said, “because her hand was bruised and swollen.”

In a statement sent to Daily Hive on Friday, August 11, Surrey RCMP said the matter is still under investigation.

“We cannot go into details as we must be respectful of the process and the privacy of those involved,” said the statement.

“We continue to look into whether the officers acted in a manner that is outside what would have been expected of them, given the circumstances.

“Once the investigation has determined that, we will update the family.”

The statement went on:

“This incident was very unfortunate and we certainly understand how upsetting this was for the girl involved and her family.

“We are gathering information to address the family’s concerns and hope to be able to provide them with a decision and closure on this matter soon.”

‘We deserve an apology’

“I was hoping to get past this pain, discomfort, and disrespect, but our police force do not think we deserve an apology,” he said on Friday.

“I am wondering if it was the other way [around], how quick they would have moved to bring charges and apply the law?”

Auguste hopes that speaking out will prompt swifter action from Surrey RCMP.

“Wearing a uniform should not be a licence to hurt people; instead it should symbolize protection, and safety,” he said.

“I would like to ask everyone to help us put pressure on the Surrey RCMP to show some respect to our family, to apologize. No one is above the law.”