Residents of Surrey are expressing a high level of concern over public safety in their community while Vancouverites are primarily worried about housing, a new Insights West poll has found.

In the Insights West online survey of representative municipal samples, half of Surrey residents (51%) identify crime as the most important issue facing their city—well above transportation (18%), poverty (6%) and education (also 6%). 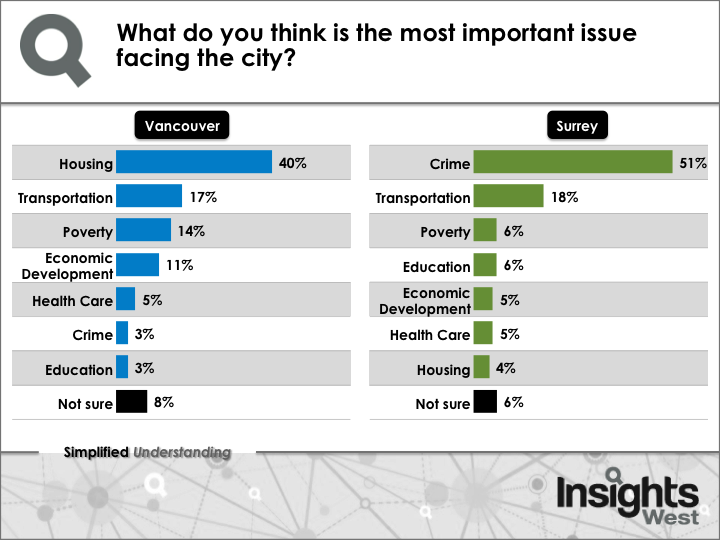 “It is rare to see crime registering at such as high level as what we see right now in Surrey,” says Mario Canseco, Vice President, Public Affairs at Insights West. “The survey shows that the population of the city is concerned about public safety on several facets, and not just as a detached issue for the municipal government to tackle.”

Crime in the Cities

Half of Surrey residents (49%) believe the level of criminal activity in their community has increased in the past five years, and 53% say they fear becoming a victim of crime “a great deal” or “a fair amount.” The numbers are decidedly distinct in Vancouver, where most respondents (55%) think criminal activity has stayed the same, and only a third (34%) fear becoming victims.

In addition, 48% of Surrey residents claim that they would feel “unsafe” if they were walking alone in their own neighbourhood after dark (just 22% feel the same way in Vancouver), and 28% say they have been victims of a crime involving the police—such as an assault or a car break-in—over the past three years (only 18% for Vancouver). 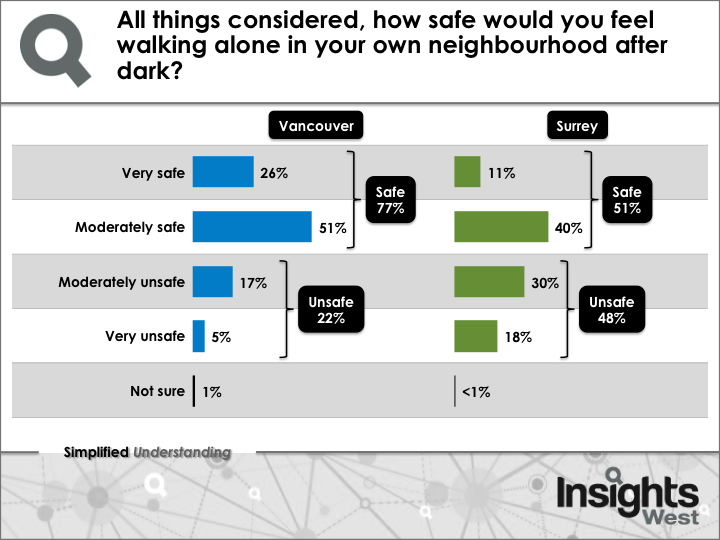 Residents of the two cities place “a great deal” or a “fair amount of blame” for the current public safety situation on various factors, but most believe gangs and the illegal drug trade (91% in Surrey, 76% in Vancouver), as well as addiction and mental health issues (89% in Surrey, 86% in Vancouver), are responsible for the state of affairs.

“Residents of the two cities do not look at public safety as something that is related to economic development or minorities—in fact those are the lowest rated factors on the two lists,” continues Canseco. “Instead, the drug trade and addiction are regarded as the main culprits.”

Views on the Municipal Governments

Surrey’s municipal government is rated favourably by a majority of residents in six of 10 tasks tested, garnering its best grades on providing good sanitation services (75%) and fostering artistic and cultural activities (66%).

Just over half of Surrey residents are also satisfied with the way their government is protecting the environment (55%), promoting tourism to Surrey (55%), managing development and growth (also 55%) and enhancing their overall quality of life (52%).

Public support is lower for the way Surrey is dealing with transportation (41%) and implementing policies to help small business (also 41%, with many residents undecided). The two worst rated areas for the municipal government are dealing with crime (26%) and dealing with homelessness and poverty (24%).

The Vancouver municipal government also has the backing of a majority of residents in six of 10 tasks, garnering its best numbers on promoting tourism (79%), providing good sanitation services (74%) and protecting the environment (71%).

More than half of Vancouver residents are also satisfied with the city’s efforts to foster artistic and cultural activities (64%), deal with crime (62%) and enhance their overall quality of life (53%).

The lowest rated areas for the Vancouver municipal government are managing development and growth (42%), dealing with transportation (38%), dealing with homelessness and poverty (34%), and implementing policies to help small business (31%, with many residents undecided). 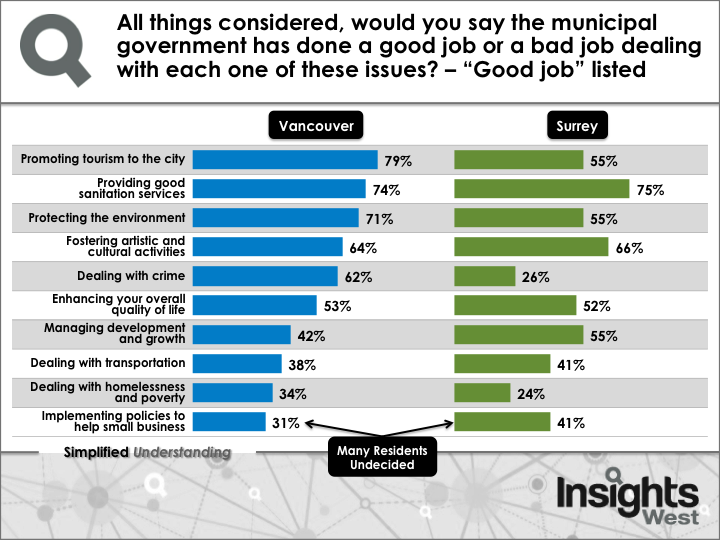 “The two municipal governments do well on some of their key competencies, such as sanitation, tourism, culture and environmental protection,” continues Canseco. “However, while Vancouver is perceived to be doing a far better job on public safety, Surrey is way ahead on handling development and growth.”

Surrey Mayor Dianne Watts holds an approval rating of 73%, with 18% of residents saying they disapprove of her performance and 9% remaining undecided.

The approval rating for Vancouver Mayor Gregor Robertson stands at 52%, with 40% of residents disapproving of the way he is handling his duties, and 8% undecided.

“Mayor Watts holds enviable popularity numbers with an election looming this year,” concludes Canseco. “Mayor Robertson gets a positive assessment from just over half of residents, but his rating climbs to 60% among respondents aged 18-to-34.”