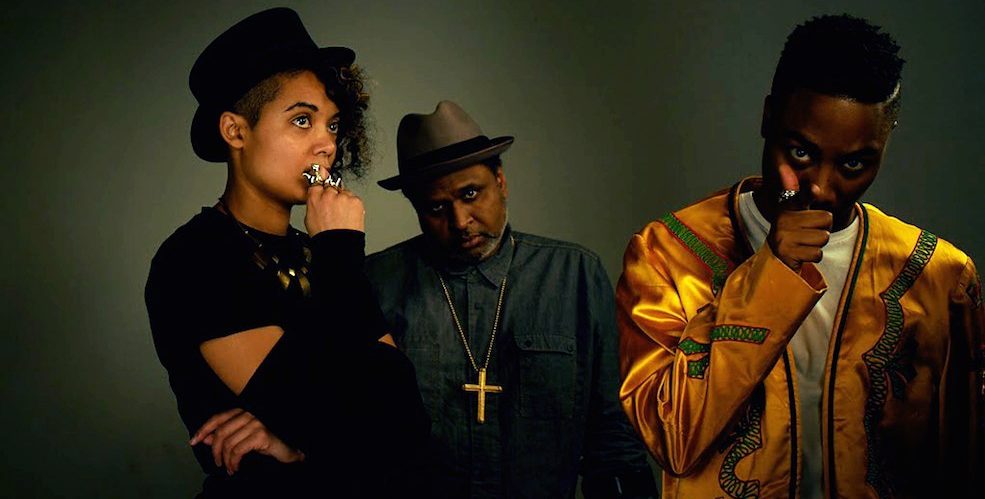 Inside a cozy Gastown recording studio, Chin Injeti, Rian Peters, and Shallom Johnson are assembled in a circle intensely discussing art. On the back wall, a sprawling mural of a young Stevie Wonder, illustrated by Johnson, listens in on the conversation.

Peters chimes in: growing up in London, England, he was constantly surrounded by art — the street art that decorated his city and within the artistic household he was raised in.

“For me, as a music entity, I’m completely stimulated by visuals,” Injeti adds, leaning back in his chair. “The visual stimuli really makes me look at chords and rhythms and the cadence of words differently.”

The trio, who make up the new electronic music project Suffer the Children, are artists of various disciplines themselves.

Injeti is a Grammy Award-winning producer who has worked with Eminem, Dr. Dre, and Drake. Peters, a singer and songwriter. Johnson is a dancer, visual artist, and poet.

By combining the different viewpoints of their creativity, their collaboration is one that mindfully recognizes and appreciates the connection between music, fashion, and visual art. Over the last year, the group has been quietly and steadily working on music, while building a multi-dimensional aesthetic that honestly reflects their ethos.

Their Instagram feed is a feast for the creative eye, with a painting from South African artist Loyiso Mkize’s current exhibition, BLACK MAGIC, posted alongside vintage photos of Nina Simone and Björk, and an editorial from Nigerian-American swimwear designer, Buki Ade.

“With where we are with digital culture today, the visual has become so much more present,” Johnson explains. “It’s not necessarily enough anymore to put out just a great track … If you can’t provide both, you’re doing yourself a disservice. And I think with us, we have a good mix of skill sets and knowledge, and we’re all willing to actively learn new things to help that grow.”

“Fashion, art, and music — it all goes hand in hand,” Peters adds.

Johnson gets up from the plush couch she is submerged in to put on an ankle skimming green velvet coat, detailed with gold embroidery.

“Did you walk through Gastown like a vampire?” Injeti grins.

Johnson laughs. “I did! The wind was blowing and I was like, ‘whooosh!’ I got it at Mintage and I was so surprised that no one had snapped it up.”

The chemistry between the three was instant. Johnson and Injeti have been friends and appreciators of each other’s work for years. Peters knew Injeti through a mutual producer friend from Los Angeles, and, after arriving in Vancouver a year and a half ago, began experimenting in the studio with Injeti and Johnson. “I was only supposed to be here for a week and I decided to extend my stay and continue collaborating with these two,” he smiles, adding that everything just came together organically. Sometimes, the best things do.

The group doesn’t bend to fit within a specific era or genre or any type of box — instead, their work aims to endure, experiment, and challenge, while remaining true to their artistic integrity. Sonically, Suffer the Children sounds like a thoughtful combination of trap, electronica, and alternative-tinged R&B. Paired with primary songwriter Johnson’s beautiful way with language and Peters’ rich, haunting vocals, the music is at once soulful, moody, evocative, and infectious — a “little left of centre,” describes Injeti.

On “Confessions,” Suffer the Children’s debut single — and premiering below on Daily Hive — lines like “I don’t need your forgiveness, all I need is your content” float on top of expansive, fluttering synths and dynamic rhythms. On “Killing Hands,” a yet-to-be-released song, imagery runs alongside metaphor — much in the same way that their moniker, which was derived from a verse in the Gospel of Matthew, in the New Testament, does: “Suffer little children, and forbid them not, to come unto me: for of such is the kingdom of heaven.” Injeti was drawn to the many interpretive qualities of the verse. For Johnson and Peters, it can refer to suffering through something and learning from it.

Johnson is, first and foremost, a poet. When she writes, the narrative is derived from bits of her story, the stories of her friends, things she makes up. It comes from more of a visceral feeling, rather than a specific thought process. “I have no interest in writing stupid words,” she says, adding that we all have the potential to shift the cultural narrative.

Peters wants the project to demonstrate that one doesn’t have to be afraid of themselves artistically. “You can step outside of the box, you can be yourself,” he insists, “because I’ve been there before. When I started this [making music], I was myself. There was no rules, there was no boundaries, I just made music because I loved it. And I got deeper into it and you get told a lot of stuff, that ‘you should do this, you should be this way, you should look this way, you should make this type of music, you should follow in this person’s footsteps.’ And it just kind of destroys people’s souls, because you’re not making or creating what you truly want to create.”

“I like to say it’s a project for the educated listener,” Injeti adds. Art, he says, is supposed to make you a better version of yourself.

“If you’re not saying anything,” Injeti continues, “it’s just noise.”