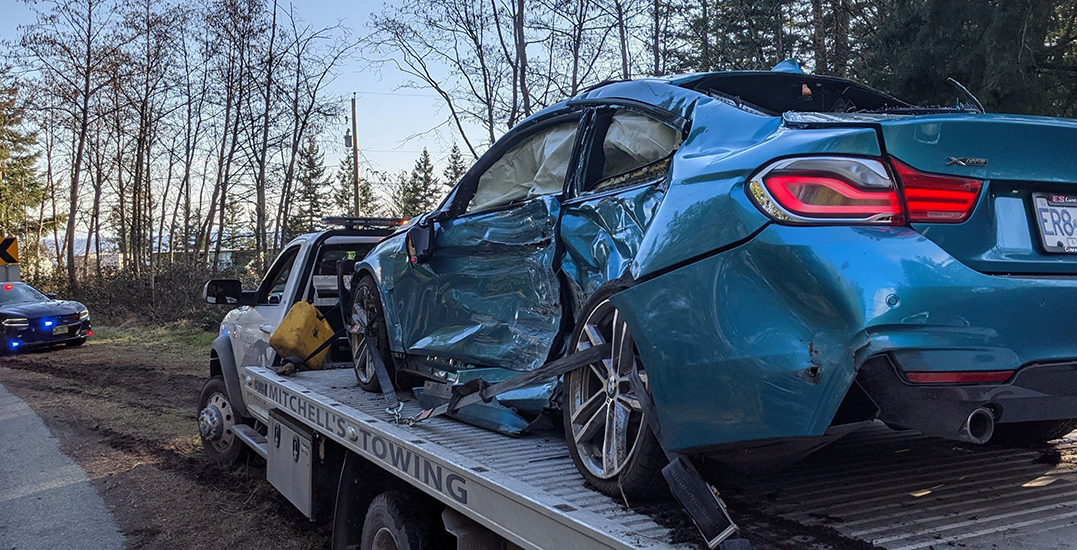 An attempt at stunt driving in West Vancouver has sent three people to the hospital and left two vehicles with extensive damage.

The West Vancouver Police Department (WVPD) says that the incident occurred on Wednesday. At approximately 3 pm, officers were called to the scene of a collision on the 3800 blocks of Cypress Bowl Road.

Police say that the driver of a BMW and two other occupants were travelling westbound when they attempted to drift through a difficult turn.

“The driver, a 20-year-old man, had accelerated to estimated speeds of 120-140 km/hr (posted 60 km/hr zone) and had attempted to ‘drift’ through a hairpin turn,” WVPD says in a statement.

The driver reportedly lost control and skidded into oncoming lanes of traffic. The vehicle struck a rock face before colliding with a Mercedes SUV, which was fortunately unoccupied.

“The actions taken by this driver not only put themselves at risk but others on the road,” says Constable Kevin Goodmurphy. “Stunt driving belongs at a sanctioned event, on a closed track, not on our public roads.”

The driver and the two passengers of the BMW were transported to the hospital, where they were treated for non-life-threatening injuries. Police say that the total damage is estimated to be over $50,000.

The driver was also found to have a Class 7 learner and was given a $368 fine for driving without due care and attention.