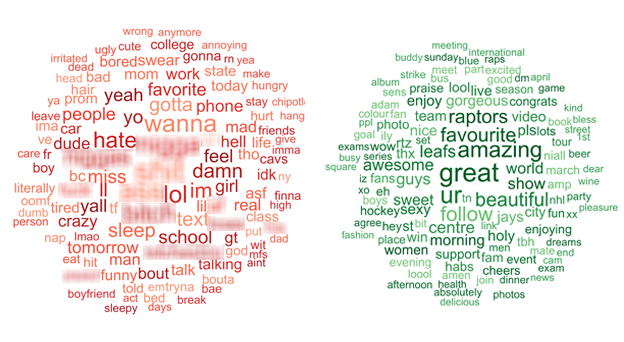 The old adage that Canadians are more polite than our neighbours to the South is proving to be quite true, at least on Twitter.

A study from McMaster University analyzed more than three million tweets from both Canadians and Americans and found we used nicer (and cleaner) words than our American counterparts.

Among Canadian favourites were “amazing,” “great,” “beautiful,” “awesome,” “raptors,” and “leafs,” while Americans tended towards words like “hate,” “damn,” “hell,” and many others that aren’t appropriate to include in this article, such as racial slurs.

“We could see the difference between the two countries’ tweets as soon as we created a word cloud of the findings,”  lead researcher Daniel Schmidtke told McMaster Daily News.

Other words Canadians frequently used include:

And other frequently used words by Americans: