There is something very Vancouverite about Bear Mountain. Whether it’s their West Coasty name, their uplifting sounds, their studio space in Railtown, or perhaps the combination of all three, whatever it is, the formula is working. From the stages of SXSW, to Squamish Valley Music Festival, to Osheaga, Bear Mountain returns to its roots next month joining a massive international line-up at the PNE Amphitheatre for the Mad Decent Block Party on September 21.

At the end of the city’s industrial waterfront, Railtown is – almost still – a hidden gem, and certainly an inspirational artist hub. I met Bear Mountain’s Ian Bevis in front of a heritage building, before being led up the wooden stairs to their studio. In the beautiful rustic studio was Ian’s brother and band mate, Greg Bevis. Greg had just taken his wisdom teeth out, but like a true rockstar, he sat with us for a chat.

For many years, bands were known to be placed in categories: rock, pop, alternative, indie, and so on. But with technology and electronic music making its way into the general music scene, bands are starting to defy those categories and creating ones unique to their sound. Bear Mountain is one of those bands.

Although they have mostly been called “electronic indie”, the brothers agreed on their genre. “Dirty pop. Like N Sync circa 1998, before JT left. That’s what we aspire to be,” Ian smiled. Being born and raised in Vancouver, Ian attributed nature to influencing their music. “Nature has always been a pretty strong influence on everything we do, everything people do in Vancouver I think. As far as the scene goes, I think it’s pretty dope. Tons of electronic music, a ton of new bands, new venues.”

To add to their epic localness, Ian, who is also a member of the band Top Less Gay Love Tekno Party, worked at Vancouver’s own Hootsuite for a few years. His old co-workers were part of Bear Mountain’s latest video for “Everybody wants to rule the world.”

When we discussed the video, I said that it felt very Vancouveresque – to which the bothers replied in unison “That’s awesome!” Filmed on the steps of the Vancouver Public Library, with supportive Hootsuite friends, the video premiered about three weeks ago.

“We wanted to film a quick video. There was an old video, it’s removed from the internet now but it’s this Ukrainian lady, singing about how much she loves Vancouver,” Ian then sings briefly. “It’s the cheesiest thing you’ve ever seen, but it’s hilarious. I wanted to do a video like that. Then things progressed, and our friend Ben Gulliver who’s the director got involved and he’s like ‘No no’.” From there, Ian said band member Kenji Rodriguez got involved and he practiced the dance in the video with their friends. The result was pretty impressive considering they practiced for a week.

Besides their dancey original tunes, Bear Mountain is known for popping up at local clubs for DJ sets. They are also actively remixing tunes and releasing them on their SoundCloud account. They recently posted their remix of Rosie June’s Sound it Out, and have a remix of a Blackbird Blackbird song on deck to be released soon. But to Ian, the process of remixing and recording originals are completely different.

“I try to do remixes pretty quickly, try to turn it around in four days. Whereas song writing, we’ve been working on this record for two years. We’ll break everything down and just really fine comb everything. Remixes are a fun way for me to do something fun with an artist, and also stuff I can play when I’m DJ’ing. I look at them totally separate. I have a lot of fun with it.”

One of their upcoming DJ sets will be at the official Mad Decent Block Party’s afterparty at the Commodore Ballroom on the night of the show. As for them being in the Block Party’s line up, the guys are definitely excited. “The MDBP is trying to have more bands and local stuff. We’re so stoked,” said Ian.

With all the festivals they have recently been playing, the boys from Bear Mountain have just finished recording their follow up to XO – which was released in May 2013 on Last Gang Records. Their latest album is expected to be released early next year, followed by a headlining tour next fall.

But don’t wait until 2015 to see these local heartthrobs, make sure to catch Bear Mountain’s set at the Block Party on September 21, which also features Diplo, Fatboy Slim, Flosstradamus, and Dillon Francis. Tickets for the all-ages show, presented by Blueprint & Live Nation, range from $59.60- $92.50 and are available online. 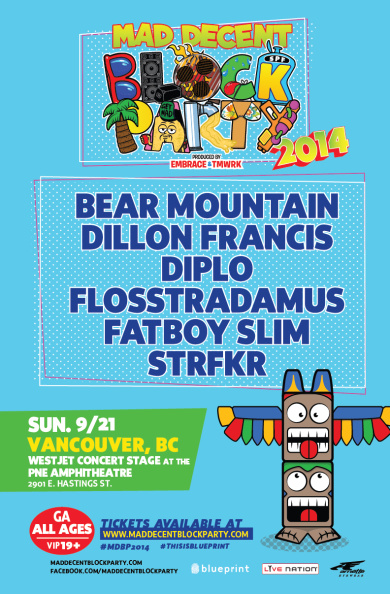