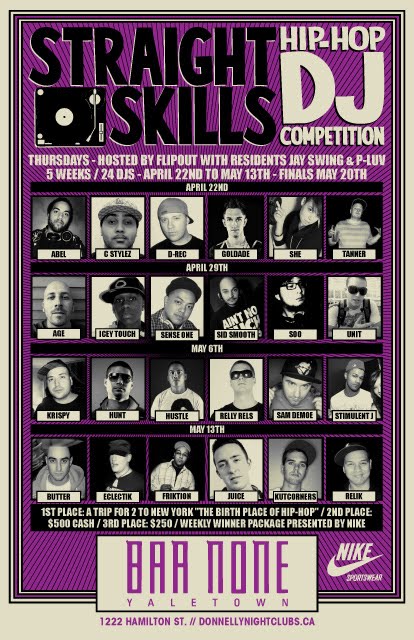 Who is the ultimate Hip-Hop DJ in Vancouver’s club scene? Well head on over to Bar None (in Yaletown) and check out the craziest DJ competition to crown Vancity’s finest. Just take a look at the poster and you’ll see that the roster is deep!
Donnelly Night Clubs and Straight Goods Thursdays at Bar None present: STRAIGHT SKILLS, Vancity’s ultimate DJ Competition.
Beginning April 22nd and taking place every Thursday until the Straight Skills Champion is crowned on May 20th, 20 of Vancouver’s best DJs will go head to head to see who is the premier party rocker in Vancity!
The competition will be judged by Straight Goods residents Flipout (2010 Red Bull 3Style Champion), P-Luv (2009 Red Bull 3Style Champion), Jay Swing (2009 Stylus Awards Vancity DJ of the Year), Matty C (DHM Talent Buyer), and special guests. Flipout will be holding down the hosting duties.
1st Place: A trip for two to New York City “The Birth Place of Hip-Hop”
2nd Place: $500 Cash
3rd Place: $250 Cash
Weekly winner and finalist packages will be provided by Nike Sportswear
Schedule:
April 22nd

So Vancity go out and support your local DJ’s and cheer them on as they compete for the ultimate prize.

Location: Bar None in Yaletown
Start Time: 10pm til 3am for each event day listed